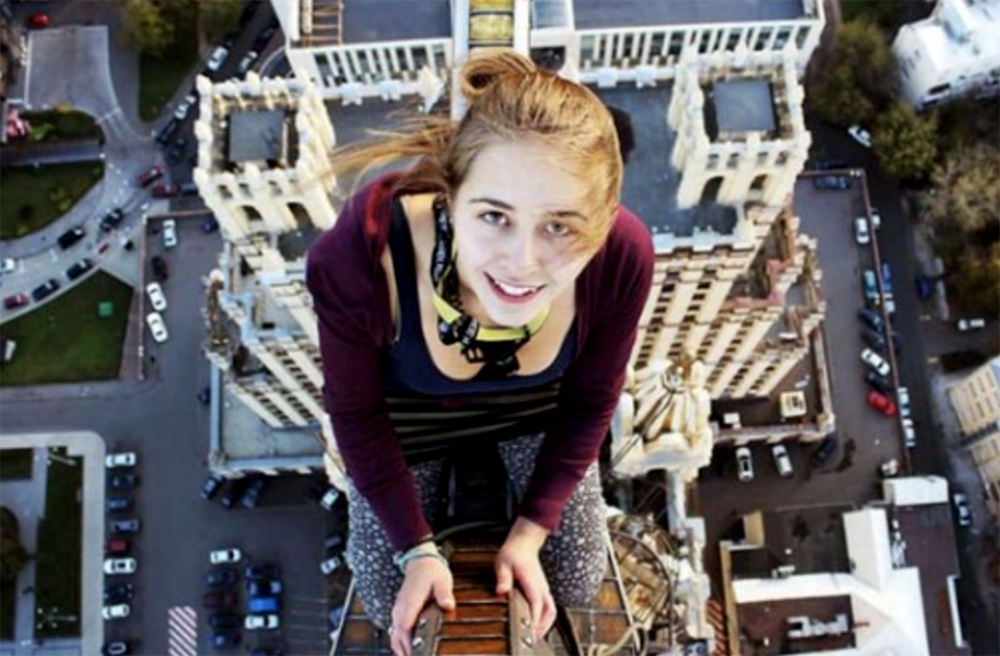 – The Obsession with Dangerous Selfies –

Young people tend to underestimate the consequences of risky behaviors with their phones. Sexting, chatting with strangers… these can have dire consequences. But a growing trend of “dangerous selfies” can have the most severe consequence of all: death. Like Xenia Ignatyeva, who fell to her death minutes after taking this selfie posted above, just a month short of her 18th birthday.

Deadly Selfies
Young people are in constant pursuit of the perfect selfie. For some kids, it means having the right light, hair, smile, and background. For the more adventurous, however, it means capturing a death-defying selfie from the top of their high-rise apartment building, or sneaking up on a wild animal, or getting perilously close to the edge of a canyon. To get a better idea of all the ways young people are putting themselves in harm’s way for a cool selfie, just search for “most dangerous selfies” on YouTube and you will get this video…and others just like it. It’s a big enough phenomenon that a video of deaths has even been compiled.

But you don’t have to go to YouTube; you can just read the newspaper headlines. In July, a British teen visiting Australia fell to his death trying to snap a selfie on the ledge at Cape Solander, a popular whale-watching site. That same month, a 16-year-old Texas girl was accidentally killed when she and her two (male) friends were taking selfies with guns. In September, an 18-year-old boy from Israel slipped and fell to his death at Yosemite National Park while trying to take a selfie atop Nevada Falls. Also in September, a 15-year-old Italian boy fell to his death from the third floor of a shopping center in Milan.

Interestingly, it’s not just teens that are dying while mid-selfie.

According to the Journal of Family Medicine and Primary Care, more than 250 people have died taking selfies since 2011. India, Russia, America, and Pakistan lead the deadly list and unsurprisingly, a whopping majority of the deaths (72%) were males under the age of 30.

But even when the selfie doesn’t result in death, the stunts can still be laden with consequences. Take the “schoolies” from Australia as an example. Every year in late November, these high school graduates in Australia flock to the Gold Coast to celebrate the end of their education. In recent years, taking some sort of daring/racy selfie has become a rite of passage. For instance, guys might hang over the railing of their hotel balconies, while their female friends may choose to flash those on the streets below.

Max Doyle, the Managing Director of Hello Social, knows why kids take these kinds of selfies. “Social media tends to reward outrageous behavior – the wilder your actions, the bigger the bragging rights.” But as we’ve seen, some of those bragging rights are being delivered to young people posthumously.

So, what can parents do to intervene in this growing trend? I suggest three ideas.

Remember, the whole point of selfies is to make memories, not archive regrets. Do everything you can to help your kids take safe and responsible selfies they can look back on for years to come.