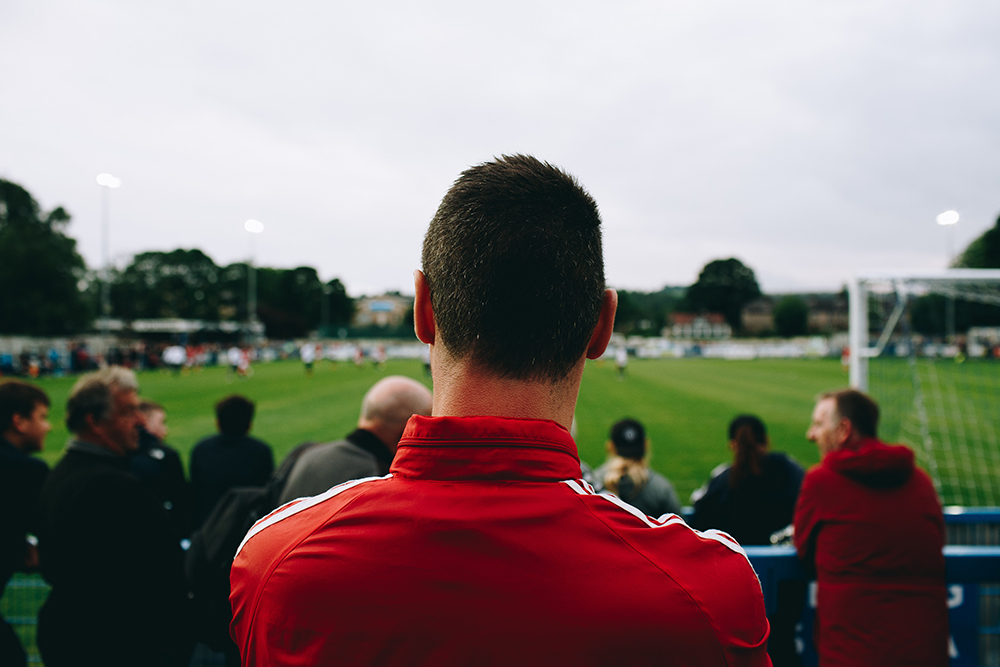 Don’t Be “That Person” at Your Kids’ Games

At many of the sporting events I’ve attended over the years – whether as a player or as a fan – someone usually says something dumb (or does something even dumber) and makes an idiot of themselves in front of hundreds (or thousands) of others.

Too often, that someone is a parent.

Personal Foul: Roughing the Reputation
One of my all-time favorite sports movies is Hoosiers. If you don’t like the 1986 classic starring Gene Hackman and Dennis Hopper as a couple of high school basketball coaches from Middle-of-Nowhere, Indiana, we probably can’t be friends. What’s not to love about this film? Every time I watch the movie there is one gut-wrenching scene that truly bankrupts me emotionally each time I watch it; it’s the scene with an out of control parent. Coach Dale (Hackman) has recently promoted the town drunk (Hopper) to the position of Assistant Coach on the condition that he quit drinking. But during one of the games, Wilbur “Shooter” Flatch shows up on the court drunk as a skunk. Not only does he thoroughly embarrass himself, but he deeply embarrasses his son Everett who plays on the team, as well.

Granted, it’s just a plot out of Hollywood, but on too many sidelines these days, too many parents are embarrassing themselves and their kids through their words and actions. Here are some of the parents who are frequently guilty of committing personal fouls:

1. The Ref Insulter
I’ve heard refs called “blind,” “dumb,” “cheater,” and every expletive in the book. I (literally) heard a man at one high school football game shout out in a menacing voice, “I know where you live, ref!” after a play wasn’t called to his liking.

In case you’re unaware, refs are human; from time to time they’re gonna miss a few calls and get others wrong. How you respond in that moment says far more about your character than their competence. Plus, you may wind up on this guy’s Facebook page letting the world see your stupidity on repeat. So don’t be the person who berates the ref just because the call didn’t go your team’s way. Nobody’s perfect…including the guys in the stripes.

You don’t want to be anything like him…at all! So you were the state champion? The record setter? The 5-star recruit to Alabama? Good for you! But constantly pressuring your kid to measure up to your past achievements won’t be much fun for either of you.

Leave your “glory days” behind and realize your kid is gonna miss tackles, layups, and fastballs. Instead of focusing exclusively on points, rebounds, sacks, assists, home runs, or some other stat, make sure to prioritize other important metrics such as work ethic, integrity, and even compassion. Your kid would much rather have your edifying encouragement than your constant comparison, so don’t let the focus be put on you.

The next parent on our list already has that covered….

3. The Selfish Slacker
The list of requirements that must be met before a team can take the field is almost endless: a coach (or two), specialized equipment, a game schedule…and of course, the field, itself! That’s why so many teams depend upon the parents of the players to pull off a successful season. So, don’t be the mom who forgets the snacks and drinks you were asked to provide. Don’t be the dad who drops his kid off at 4:17 even though practice starts at 4:00 sharp. Don’t let the details you’ve been assigned on behalf of the team fall through the cracks.

Teamwork isn’t just for the kids wearing the uniforms. Parents must play their part, too! Honor the commitment of others by keeping those you’ve made.

That way, you’ll never be….

4. The Excuse Maker
At a recent high school championship game, a senior on our team was ejected in the closing seconds for committing a flagrant foul against an opposing player on the court. The foul was as selfish and ridiculous as it was dangerous for the other player.

Our local Ref-Insulter griped that the young man was simply frustrated due to the bad calls made throughout the game. The kid’s mom placed the blame for her son’s behavior at the coach’s feet. Another mom – an educator, no less – tried to cover the player’s foolishness by pointing out the other team’s high foul count. Yep, a bunch of adults rushed in to rescue the young man before he could ever learn a valuable lesson about self-control.

Instead of immediately making excuses for poor behavior, poor performance, or poor sportsmanship, give players the appropriate time and space to grow in the shadow of their mistakes. After all, flagrant fouls in the real world can carry stiff penalties.

It’s best they learn that lesson on a court…instead of in a court!

Time Out
I hope you didn’t find yourself on this list…but if you did, the good news is, you don’t have to be “that person” ever again. That’s what time outs are for! They allow you to change your strategy in the middle of a game. Let’s call a time out.

Do you need to repent of some behavior? Then do so with humility.

Do you need to make apologies? Then do so with authenticity.

Do you need to step up your commitment? Then do so with fervency.

There’s never a time when our kids – and maybe some refs – aren’t watching our example. Remember that being a Christ-follower requires holiness in all aspects of life…even in the bleachers.