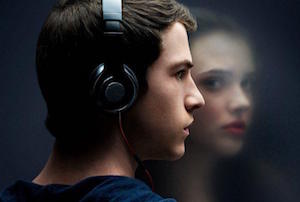 It’s Hannah, Hannah Baker… I’m about to tell you…why my life ended. And if you’re listening to this tape, you’re one of the reasons why.

Netflix has once again introduced a show that has captured the conversation among teenagers, much like last summer’s hit Stranger Things.

Based on the Jay Asher novel of the same name, 13 Reasons Why, tells the story of a teen girl’s decision to end her own life. High school sophomore Hannah Baker records thirteen reasons she ended her life, because, as she says, “there are thirteen sides to every story.” Recording on old-school cassette tapes, Hannah orchestrates a scenario in which those she blames for her death will listen to the tapes and know why she took her own life.

The show is dark, emotional, and drags on for thirteen, hour-long episodes. Watching it, I wondered, “What is it in this series that appeals to young people?” While there is something to be said about teenagers gravitating to things because everyone else is doing it (Pokemon Go anyone?), there is something else that draws them to a show like 13 Reasons Why. It makes them feel understood.

Approximately 20 percent of teenagers confess that they worry “a great deal” about current and future life events. But only 8 percent of the parents of these same teenagers report that their child is experiencing a great deal of stress. Parents often don’t realize the constant heat felt by adolescents, increasing the pressure for them to figure out who they are and what’s important to them.

It’s common for adults not to understand the realities that teenagers face.

The teenagers in this show were often confused, overwhelmed, and alone. They defaulted to secrecy because they believed nobody would understand what they were going through. They had big questions and no answers. As Hannah says, “You really don’t know what’s going on in some else’s life.”

Teenagers want to feel as though someone relates with the stress and pain they endure. They want someone to understand them. They want to know they are not the only one hurting.

In Hannah’s tape to Justin, her first kiss who sent an up-skirt pic of her around the school, she says, “I’m not angry you betrayed me. I’m angry I trusted you in the first place.” When Hannah recaps losing her friend Jessica on her tape, she says, “losing a good friend is never easy, especially when you don’t understand why you lost them in the first place.” A quick look at Twitter showed these quotes recently tweeted by many teenagers. They relate.

Having taken notice of teenagers’ awareness of this show, how should adults respond? Should parents ban their kids from watching it? Are most parents even aware their kids have seen it?

As you wrestle with these questions, here are two glaring truths the show accurately unveiled that today’s parents should consider.

Engage with Your Teenagers
It was glaring how uninvolved and disengaged these parents were in the lives of their kids. Hannah Baker’s well-intended parents did not know who any of her friends were. Teenagers regularly had parties at their homes with little mention of parents. One character was pulled over for going 90 miles per hour, and it turns out the cop was his dad who brushed it off and went on with his night.

The interactions with parents were forced, filled with deception, and painted the parents as uninterested and ill-equipped. Is this a reality?

The school counselor, Mr. Porter, was also overwhelmed, and he lacked clear direction on what he was trying to do for students. There were teachers who were present but not involved. The characters of this show had no adults in their lives to listen to them, speak truth to them, and to love them.

Author Reggie Joiner writes, “If you look back over your own life, you will probably notice that certain individuals stand out over time because of the impact and influence they had in your life.”

Teenagers need adults who will help them navigate the critical situations they will face in their lives. Be present. Teenagers often fear the reaction of their parents and other adults, which keeps them from sharing their lives. This only fuels the importance of understanding teenagers. As Proverbs 18:2 says, “a fool takes no pleasure in understanding, but only in expressing his opinion.” Take time to listen, to understand, and to empathize with teenagers.

Quality time happens as an accidental result of quantity time. Let’s have less of the infrequent interrogations, and more of the consistent engagement in the lives of teenagers.

Communicate Hope
In a disturbingly graphic scene, Hannah eventually cuts her own wrists and bleeds out in her bathtub. As this scene unfolded, I found myself yelling at her saying, “No Hannah. Don’t do this. It gets better. There is hope.” When her parents rush in and repeatedly say, “you’re okay Hannah” I was shaking my head knowing, “it’s too late.” Someone needs to tell teenagers today that it’s not too late. There is hope.

Much of the conversation about this show has assumed that it glamorizes suicide. I would not want to discount those who may feel empowered by Hannah Baker’s act. However, if that is your main discussion point with teenagers from this show, I believe you will be missing out. Yes, you should be aware of the warning signs, as suicide is not something to second guess on.

There is a God, He is real, and He loves you. Whatever you are going through, it is temporary. There is hope. Your best days are ahead. Jesus wants to walk with you through the lowest of lows, and bring you through the things you face.

Someone needs to tell them. Romans 10:14 says, “and how are they to believe in Him of whom they have never heard.” They need you to tell them. Your role matters.

As Clay Jensen says in the final episode, “it has to get better.” It does get better, Clay. There is hope.

In the final scene, Clay is in a car traveling down the highway, and he smiles as he looks out the window, as if he’s saying, “the best is yet to come.” Let’s communicate that hope to the teenagers we do life with.

Are you engaging with your kids? (Not lecturing your kids about what they should watch, but engaging them in conversation where they talk and you listen?)

Are you looking for opportunities to share the hope?

What can you do to engage your kids in meaningful conversation this week?

And be prepared. Season two is reportedly coming.