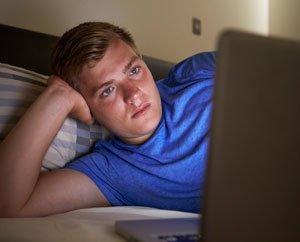 Do your kids ever leave the house? Do they have access to any screens? Do they ever hang out with friends?

(The following is an excerpt from Jonathan’s brand new book, More Than Just the Talk)

If your kids watch TV, then they will hear sexual references, jokes, and innuendos frequently.

In 2014, The Voice was in the top ten on the Nielsen charts almost any given week of the season, often claiming the top spot (as it does today). Shakira’s stardom increased tenfold during Season 6 as a judge on the show (Feb-May 2014), so it wasn’t surprising when her hit song “Can’t Remember to Forget You” was in the top 100 of the music and music-video charts for much of the year. In this video, Shakira sang nearly naked or in lingerie before ending up on a bed with Rihanna as they groped themselves and each other. Even Elle magazine referred to “all the ridiculously hot, nearly naked looks from Shakira and Rihanna’s new video.”

And this is just what kids are gleaning from the “clean” programming our world offers.

It doesn’t take an expert to realize that all these sexual messages and images make kids even more curious about something that is already enticing.

So where do they go for answers?

Anne Marie Miller is the first person I heard use this phrase in her article “3 Things You Don’t Know About Your Children and Sex.” After spending a summer speaking to kids about sex and counseling them, she kept hearing the same thing over and over again. Whenever she inquired about a young person’s first exposure to pornography, she heard the same answer—Google Image searching.

Kids are going to the web, rather than parents, for their answers.

In her research, she met a 16-year-old girl who had been dating a boy for four months, and liked him, but was scared by him whenever they got alone because, she claimed, “he changes.”

That’s why we need to open up the doors of communication about it in our homes.

I’ve been researching youth culture, studying parenting practices, and teaching parent workshops for over a decade now. I’ve read countless studies speculating how to be a better parent, how to reduce the risk of pregnancy and STDs, how to steer kids away from drugs and alcohol . . . I’ve read it all. And the one deduction I can wholeheartedly conclude is . . . no one agrees! I’ve read reputable studies that say more boundaries are the answer, where other respectable studies concluded the exact opposite—more freedom is just what kids need. But in all the studies, from all the PhDs in every university and practice imaginable, one common theme emerges. Every single expert agrees on one thing: We need to talk with our kids about this all the time.

So how do we have this conversation?

First, remember, it’s not one conversation—it’s many. Look for opportunities to have these conversations. If a favorite TV character decides to sleep with his girlfriend, hit the pause button every once in a while and talk about it. Bring it up at dinner and ask their opinion. Do more listening than lecturing. More dialogue than monologue.

If the only time we dialogue with our kids is when we want to teach them something, we’re missing the point. We should be talking with our kids about everything. If you notice your 5-year-old carrying around a particular teddy bear, ask him about it.

Because as parents we love our kids and want to get to know them better. Even the names of their teddy bears.

“Tell me about Rufus.”

The more we listen to our kids in daily life, the more they’ll come to us when they really need someone to listen.

As they grow and become more curious about sex, it won’t be a surprise when we discuss it with them. After all . . . we talk about everything.

Don’t be afraid to use discussion tools. My last book, Get Your Teenager Talking, is full of discussion questions that open doors to meaningful conversations. Crack a book like that open at dinner and ask your kids what they think about real-life issues.

Dads, don’t be afraid to meet with your sons once a week for breakfast and go through a devotional that speaks candidly about these issues. My devotional, The Guy’s Guide to God, Girls, and the Phone in Your Pocket has been called “refreshingly brutal.” It gives advice like, “If you have to look over your shoulder to check if anyone’s in the room, you probably shouldn’t be typing it into the search engine.” Or, “God wants you to enjoy a naked woman . . . one naked woman.” The book has countless entries about sex, temptation, and the way we should treat the opposite sex.

Books can be great resources, but don’t hesitate to use your Bible as well. Share Scripture and ask questions about what you read. Start with 2 Timothy 2:22 and 1 Corinthians 6:18.

Use questions as often as possible. Constantly look for any opportunity to listen to your kids’ hearts about the issues they are struggling with.

But let’s not forget to create an environment where our kids can learn to make these decisions without being bombarded with sexual content at every turn.

But that doesn’t mean we should raise our kids in the red-light district.

This is a tough balance at times.

Seriously. Doctors frequently release studies about the effects of entertainment media on young people. For example, the American Academy of Pediatrics (AAP) recently published a report titled Children, Adolescents and the Media unveiling the effects of media on children zero to 17-years-old. These doctors recommended the following to parents:

Note: This report wasn’t from Focus on the Family or some Christian publication. This is what secular doctors are recommending.

Are you teaching your kids how to make responsible decisions about entertainment media and technology?

Do you know what apps your kids are using? Do you “coview” TV shows, movies, and YouTube videos with your kids? Have you had conversations about who they are communicating with in social media? Have you set some helpful guidelines and curfews for the entertainment media and technology in your house?

This is what these pediatricians recommend.

Don’t feel pressured to buy your 10-year-old a phone or a tablet just because every one of her friends has one. You’re not doing your kids a favor if you let YouTube, TV, and social media raise your kids.

When my kids were younger, we set some pretty strict guidelines to help them see the truth through the dense fog of entertainment lies. As they turned 15 and 16, we lightened up a little, allowing them to make more decisions, but we kept some helpful guidelines:

These rules didn’t hinder them from learning to make good media decisions themselves. On the contrary, they taught them discipline and restraint. My older daughter, now off at college, says she wishes we could have had more nights of “no entertainment media.”

In addition to porn filters, investigate how to use parental controls on your kids’ phones and other mobile devices. When they’re young, use a high amount of control, blocking out anything questionable. You have the password and only you download new apps. As they get older, give them more control as they prove themselves trustworthy, but continue to hold them accountable. In other words, maybe give your kids the ability to download apps themselves, but ask them about the apps frequently and have them show you what they do. Ask them what their experience has been. Teach them to make good media decisions—after all, when they turn 18 and are on their own . . . they can download whatever they want.

Are you equipping them for that day?