The Value of Video Games 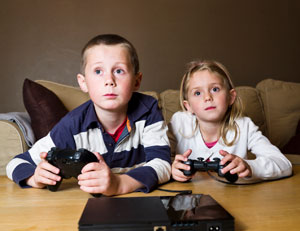 Our culture (especially our Christian culture) has dedicated a lot of thought and time to why we should avoid video games.

Believe it or not, that is not a good thing.

Imagine someone handing you a copy of one of the classics from C.S. Lewis’ Chronicles of Narnia series, but when they do, they make a point of emphasizing that, even though it’s fun to read, it’s ultimately worthless and you should be careful not to waste too much time reading it. No matter how much positive symbolism, moral exploration, or cultural value the books have… it’s “just entertainment.”

In school we are taught to value art and literature, yet, with video games, we do the exact opposite. It’s violent (of course, no books are violent), it’s technology (and all technology is bad, right?), and it requires you staring at a screen (and screen time should be limited, right?).

So how can kids possibly draw any value from this relatively new art form?

Make no mistake; video games are an art form, and as a parent, you should not only help your child play responsibly, but help them gain positively from what they play.

In the last article, we explored why people play video games with four major motivators: abnegation, fantasy, art/literature, and socialization. Now let’s develop these four motivators into distinct methods to get the most out of video games.

Abnegation
We all have hobbies and pastimes we use to unwind. Even if you don’t understand gaming, you can understand that common human need.

The value of this one is simple, but important and widely overlooked, and not at all unique to video games. They’re just a perfectly healthy and legitimate way to burn stress, like any other hobby. Now of course simply passing time is the least valuable way to use an art form, so if abnegation is your child’s only reason for playing games, it may be worth trying to get them into one of the other three motivators, but there is nothing wrong with abnegation.

Fantasy
To clarify, this is referring not to magic and strange creatures, but the desire to play a game for the sake of filling an idealized role, such as a capable soldier, an intrepid explorer, or a defense attorney fighting for justice in the courtroom (yes, that’s an actual game series, and it’s awesome).

As with abnegation, this is often demonized as taking players away from reality. Interesting how easily we forget that we use this very appeal to get kids to read, with catchphrases like, “Books take you to exciting new places!” Apply that same attitude here.

Games have the ability to let players explore situations that may be unavailable to them in real life. While video games certainly have a lot of growing to do in this area (there have only recently been games challenging players with disempowered roles, like someone suffering from depression or a border patrolman), there has still been much positive influence in this regard, like this guy who was led away from suicidal thoughts by Tomb Raider.

Art/Literature
You may not see it much, depending on the types of games your child plays, but video games are a powerful storytelling medium. Great discussions can be had based on the stories video games tell, just like with a movie or book.

Of course not all video games do this; like trashy romance novels and mindless action movies populate their respective mediums, so do many games with little to no artistic ambition. But also like film and literature, there are still many video games that tell truly great stories.

Stories are powerful. That’s why Jesus often taught in parables instead of listing off facts like a spiritual textbook; stories help us explore and understand our world. Video games also often go beyond this, confronting the player directly by presenting them with a situation that challenges their beliefs and forces them to not only contemplate the scenario, but make a decision on where they stand.

Socialization
What makes video games different from board games or sports?

They’re digital, involve less physical activity than sports, often involve fantastical elements… but these answers only scratch the surface of what games are. We don’t play board games or sports because they’re physical; we play them for the fellowship brought by competition and cooperation, and the challenge of bettering our skills. We need to look at what defines a game, what motivates us to play it.

The next question is whether video games lack these motivating factors. And, put simply, they do not. That competition and camaraderie is still there. And of course there is still the challenge of improving one’s skill. Multiplayer video games offer the same value as board games, card games, and sports, even if they do so in a different way. The competition, cooperation, and improvement of skillful play are all present, and these elements bring people together very effectively.

Conclusion
Just a few more general tips on how to interact with your kid and their interest in video games:

I hope these articles can help you build and maintain a connection with your child, and even help you both develop a better attitude about video games. There is a lot to be excited about with this new medium, and even if your child will always be more invested than you are, it can never hurt to keep up with them a bit.