The Steam Store: Is it Possible to Monitor Your Child’s Use of It? 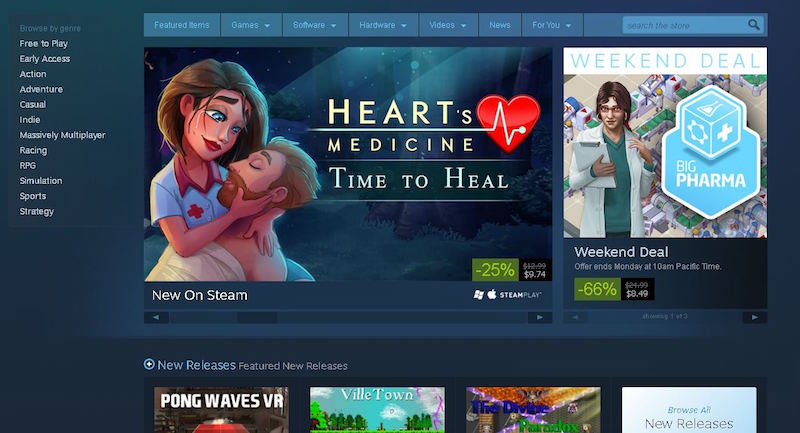 If you or anyone in your family play video games on the computer, you’re probably familiar with Steam. It’s been the premiere supplier of computer games since 2003, and most games you can buy on a computer are sold primarily, if not exclusively, through this free program.

Recently, Steam has been making changes to which games it sells and how it presents them. This culminated in an announcement in June of 2018, when Steam concluded that, “the right approach is to allow everything onto the Steam Store.” This, of course, includes games with relatively graphic content compared to most commercial video games, which may alarm parents who are concerned about what their children are exposed to.

Let’s look at how this came about, what it means for parents, and how you can successfully monitor which games your children have access to on this popular platform.

What Happened and How?

With an artistic industry like video games, many changes are bound to come to what kinds of games are made and how they’re sold. Steam has long struggled with how to enable independent game development on its platform while still maintaining control over what is sold through its service. They’ve tried a number of systems to encourage indie developers to use their platform, such as Steam Greenlight and Early Access, and all have met with mixed success because of this struggle; allowing anyone to put games onto Steam has resulted in exceptional growth alongside a dearth of half-baked or offensive releases.

This may sound like a complete negative, but it’s a little more complicated than that. Positive effects include the popularization of the visual novel, as the genre (which is basically like reading a book with pictures and music, and a changing story depending on the player’s choices) had existed almost exclusively in Japan and languished in obscurity here in the west. It’s also made it easier for independent game developers to create unique experiences that push the medium in interesting new directions.

Which leads us to the decision made in June.

What Did Steam Decide, and Why?

“We’ve decided that the right approach is to allow everything onto the Steam Store, except for things that we decide are illegal, or straight up trolling,” said Valve’s Erik Johnson. “Taking this approach allows us to focus less on trying to police what should be on Steam, and more on building those tools to give people control over what kinds of content they see.”

Setting aside concerns over what content we, as Christians, may or may not believe is appropriate to be expressed in art, the dilemma is a legitimately difficult one. Video games are a rapidly growing art form, and much progress has been made in the last couple decades by allowing people to try new things and make their own video games without the developmental requirements imposed by major game publishers. It is legitimately important to allow indie developers access to the kind of exposure Steam offers.

But there’s a reason console manufacturers like Nintendo have such stringent standards; they want their brand to be associated with quality games, and are careful with what they allow in their game libraries. It’s understandable that Steam would want to retain power to curate the content it allows on its store. But attempts to police it infringed too far on that open platform mentality for their, and their users’, liking.

The result is a relatively lax approach to what content is sold on Steam.

What Does This Mean for Me and My Child?

In short, it means Steam is no longer responsible for controlling what content your child has access to: you are.

It’s understandable to be a bit alarmed at this development, especially if you’re the kind of parent who watches their child’s gaming habits from the sidelines more than engaging with it yourself. The reactionary response may be to simply disallow Steam from your house. And if you wanted to simply remove this program from your child’s life in favour of other options like Good Old Games or Humble Bundle, that would be a viable option.

But I would posit it’s also an overreaction. Steam is still the premier service for purchasing games for the computer, and there are many wonderful experiences, for both you and your children, that are only available on that platform, or would otherwise require a game console to play. So if you’re still with me, let’s go over how you can control what you and your child see on Steam.

Steam still has a level of content control; they have an approval process, and their statement about “things that are illegal, or straight up trolling” indicates that they will not allow illegal or arbitrarily provocative content. But this indicates a shift in priorities; rather than controlling content beyond these basic standards, they put the onus on the user (that is, you and your child) to control what they see, and provide the tools necessary to do so.

The tool you need as a parent is Steam Family View, and you can access Steam’s guide to using it here: https://support.steampowered.com/kb_article.php?ref=5149-EOPC-9918

With Family View set up, the changes to Steam’s content allowances won’t put potentially inappropriate content within view of your child. You are the one in control of what they see.

And ultimately, controversial though these changes may be, that seems like a fairly reasonable demand to make of a parent. We can argue whether certain content is appropriate to have readily available on platforms like Steam, but we can all agree that the responsibility for what your child is exposed to (and when/how those boundaries begin to loosen as they mature) lies with the parent, not any company or storefront. As long as you’re aware of these issues and the tools at your disposal, your child can safely enjoy all the wonderful things video games have to offer (which this reviewer has previously made clear is a lot) while you protect them from things they may not yet be ready for.