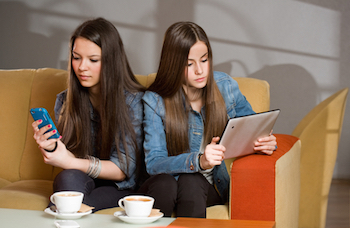 “Studies of conversation both in the laboratory and in natural settings show that when two people are talking, the mere presence of a phone on a table between them or in the periphery of their vision changes both what they talk about and the degree of connection they feel.”
–Sherry Turkle, Stop Googling. Let’s Talk, New York Times, 9/26/15

The evidence is clear. Face-to-face conversations are becoming much more difficult for young people today. You probably don’t need to read a study to come to that conclusion. If you are a parent or have any contact with teenagers day to day, then you probably have noticed these symptoms:

In short, as today’s “Smartphone Generation” becomes more tech-dependent, they are becoming increasingly socially retarded (which I mean in the original Oxford Dictionary definition of the word).

We’re seeing this trend revealing itself in several different ways:

In 2014, UCLA did an eye-opening study where they observed kids who were unplugged and media-free for 5 days at an outdoor camp. By the end of the 5 days, these kids were better able to understand emotions and nonverbal cues than kids who were plugged in to a normal media diet.

What does this mean? It simply suggests that real-life face-to-face conversations are superior. Yes, even when we use emojis—the digital slang of the new Millennium—digital communication isn’t as powerful as good ol’ fashioned face-to-face.

We saw this reality clearly in a bonding experiment where people engaged in conversation with friends four different ways: in person, video chat, audio chat and instant messaging. Bonding was measured and differed “significantly across the conditions.” The greatest bonding occurred during the in-person interaction, followed by video chat, audio chat and then IM, in that order.

Digital mediums are handy, but they lose something. In fact, one of the negative bi-products many are noticing is a…

2. Lack of empathy:
Although there is some debate as to whether social media and other forms of technology are hindering the ability for teens to empathize, most experts are noticing a correlation between technology and this lack of empathy.

The more young people connect physically-disconnected from each other, the less they are able to recognize normal social cues about what others are thinking or feeling. No, this isn’t just kids who play violent video games (research suggest kids who play lots of violent video games do exhibit a lack of empathy, anti-social, and sometimes even hostile attitudes). In fact, it’s a trend observed especially after the year 2000, but even more pronounced in young people today.

Sherry Turkle, M.I.T. professor, and author of the book, Reclaiming Conversation: The Power of Talk in a Digital Age, has noticed this in her own research, noting today’s kids “don’t seem to be able to put themselves in the place of other children.” In fact, kids who are sitting around staring at their phones consistently “seem to understand each other less.”

The natural next step in this digression is…

3. A decrease in close friends:
In a world where 4 out of 5 teenagers are social media users, you’d think young people would be more… social? I’ve blogged about this social media irony before. Most research suggests—the more time a young person spends dialoguing with people through their screens, the fewer friends they have and the more difficult it becomes for them to actually communicate face to face (read that entire post here).

So Are Phones Bad?
This is where many kids would ask me, “So you’re saying phones are bad?”

And here’s where I would answer, “I’m simply suggesting that you need to be smarter than your smartphone.”

It’s a theme I teach when I talk to young people about this subject across the U.S. Phones can be great tools, but they are a lousy crutch.

We need to help teenagers move from being tech-dependent to tech-enabled. Phones are really convenient tools when they help us communicate with people outside of the room, but become a hindrance when they interfere with our connection with people inside the room.

Many of today’s teenagers have just never been taught digital etiquette. In fact, many parents model the exact opposite of how teens should treat the people in the room. We need to help kids understand how to use their phones for connection, not disconnection.

Here are 3 ways to help your kids CONNECT with people in the room:

Read the highlights of an article like the examples above to your family after dinner some evening and simply ask, “Is he right?” Don’t lecture, just share some brief highlights, and then ask a well-placed question.

Then teach your kids some tools to keeping their phone in check, like…

2. Teach our kids to use DO NOT DISTURB
The iPhone has a really handy feature called DO NOT DISTURB. You can harness this feature with a simple swipe from the bottom of a screen, and hit the moon icon. It’s simple to set up. This puts your phone in a silent mode where it doesn’t vibrate, light up, or make a sound of any kind, unless set up to specifically do so.

I created a special folder in my CONTACTS, labeled it DO NOT DISTURB, and dragged my family into it. I allow calls from them and repeated calls for emergencies. Other than that, my attention isn’t ever distracted from the person in front of me. In other words, if you are meeting me for lunch, the only person that could possibly interrupt me from my conversation with you is my wife or one of my kids off at college (I get giddy when they call).

This feature lets the people in front of us know they are more important to us than a text from a co-worker, or a call from Direct TV offering us HBO free for three months.

3. Create device-free zones and moments
My family introduced “No-tech Tuesdays” a few years back. My daughters grew to love this time, sitting around the living room, device free, reading by the fire. In fact, when my older daughter went away to college she commented, “I wish we had more of those nights.”

* * *
Are you demonstrating what this looks like in your home?

Mobile devices aren’t bad, but they can hinder relationships if we allow them to become a substitute for face-to-face conversations. “When we pour our feelings onto a screen instead of a human being, we’re removing the vulnerability and risk that are a fundamental part of intimacy.” (Turkle, Talking about the App Generation, Amplify)