Put Your Phone Away… Mom! 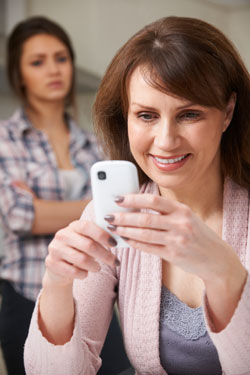 The number one complaint I hear from parents today: “My kid can’t go five minutes without looking at her stupid phone!”

This isn’t surprising in a world where about three quarters of teens now have smartphones and are mobile internet users. How can a 16-year-old with 387 Instagram followers possibly go an entire dinner without their phone buzzing at least once?

And when a phone beckons, we must answer, right?

Forget teens for a second. In a world where the average American adult spends 11 hours per day with digital media, you might want to think twice about your answer. Because researchers from Boston Medical Centre would argue parents are setting precedent with their own phone habits.

In their study, these Boston researchers discovered:

I gotta admit, when I read about this study, my first thought was, I typically check my phone once when I am out at a meal.

Funny, when my family is at home, we don’t bring our phones to the dinner table. We’ve declared the kitchen a no-phone-zone, if you will. Our family typically eats together and does dishes together. It’s usually a pretty fun time with lots of talking, laughing and joking together. The phone doesn’t interrupt this.

But often we do let the phone interrupt our lives. It’s like the phone connected to our walls 20 years ago. When that thing rang, what’s the first thing we did? We got up and answered it. Forget that we were in a deep conversation with our family… the phone is ringing!

Why don’t we all just agree to put our e-conversations aside for a few minutes and focus on the conversations we’re having face to face first.