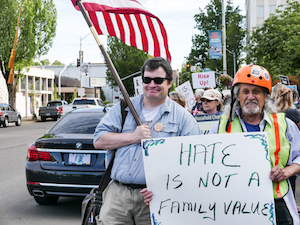 That’s what almost every bumper sticker in my town read.

I was only 15-years-old, and I remember feeling proud to be American, proud of our troops, and proud of our president. Our country seemed… unified.

It was 1991. Our president had declared a war against evil. Some didn’t agree, but most the country supported our soldiers. As a fifteen-year-old having heard about the division in our country during the Vietnam War, I was not sure what to expect as we started this fight. What followed was even more inspiring to my teenage heart. People started taking yellow ribbons and tying them to their trees in a unified effort to support the troops. The phrase we support our troops became commonplace on printed materials that were proudly displayed in businesses and homes. The unity of these days made an impression on me that has remained many years later.

After the terrorist attacks on September 11, 2001, we once again saw this tremendous unity as a nation. The American Flag was proudly displayed while the phrase never forget became synonymous with the unity of that time in history.

When I consider those times, it seems difficult to imagine that type of unity occurring in our country today. We find ourselves in a season of divisiveness that our country has not seen, perhaps since the 1960’s. Every Presidential election since 1984 has resulted in the victorious candidate winning with less than 53% of the vote. This means there is an entire generation who has grown up in an era of political division. We have seen racial and gender tensions escalate amid a world where moral issues are being constantly challenged. While sometimes teenagers can be ignorant to the realities of this world, how can we engage them to make sure they have a healthy perspective toward these issues?

One of the biggest challenges of the current generation of teenagers is their lack of desire to be engaged with world events. We saw this when teenagers mostly ignored the 2016 Presidential Election, except for an occasional retweet or random comment. As a generation, they are not opposed to standing for something, but seem to prefer avoiding thinking through difficult things. This explains the popularity of Snapchat as it eliminates the dilemma of picking the perfect picture or caption for Instagram. Snapchat also removes the social pressure as teenagers do not have to be concerned with likes or comments. Ultimately this generation practices avoidance as they gravitate toward the mindless use of apps, text conversations, and streaming media.

With that said, it is important that we do not allow what we see on the outside keep us from asking questions of the teenagers in our lives. Even though they may not express an inner conflict, it is likely there is a deeper awareness of these issues than one might see on the surface. As parents, we want to make sure we are equipping our teenagers to handle the things they will encounter in this world. They will face the effects of division, so we would do well to give them the tools now while we can influence them.

Create Discussion
The best way to get a response from teenagers is to ask questions. Crazy, right? If you are not getting good answers, then consider if you are having these conversations regularly. The book, Sticky Faith, says that only 12 percent of youth have a regular dialogue with their mom on faith issues. The statistics for fathers is worse as only 5 percent have regular faith or life conversations with their dad.

You as a parent can change that trend. In his book, It’s Just a Phase so Don’t Miss It, Reggie Joiner urges parents to rely less on their positional influence and increase their relational influence until a child can live independently. As parents, we should be asking teenagers what they think about world issues, even when they are ignorant of them. Present scenarios, ask questions about related topics, discover what they are thinking. With my own teenage daughters, I usually assume ignorance going in, broach the subject, and then ask some questions to get their read on it. If the opportunity is there to go deeper, I’ll take it. If it’s not, then I’ll move on. The bottom line that it is our job to create conversations with our kids.

Create Experiences
If the goal is to engage our kids with the divisive issues that are present in this world, we would do well to remember this important truth: information doesn’t change teenagers, experience does. I learned this one later than I would have preferred when it comes to my own kids. Despite all the teaching on caring for the poor, it wasn’t until we started serving food at a shelter that I noticed my kids were caring about poverty and homelessness. Create diverse experiences for teenagers. This could mean visiting a church or activity with people who look different from you. It could mean encouraging your teenagers to build diverse relationships or other exposure to those of different backgrounds.

Seek God together
Our kids are being raised in a world where differences can divide more often than unite. Turn to God’s Word to help them understand how a follower of Jesus should respond to division. When it comes to believers who are divisive, talk about what it means to be united in Christ.

Galatians 3:26-28: So in Christ Jesus you are all children of God through faith, for all of you who were baptized into Christ have clothed yourselves with Christ. There is neither Jew nor Gentile, neither slave nor free, nor is there male and female, for you are all one in Christ Jesus.

If we are united in Christ, then all other differences can be overcome. As for division with those who do not walk with Jesus, explore how we have intrinsic value because of being made in the image of God. There is a level playing field in this world no matter what differences a person has simply because we were all formed by the same Creator.

Finally, find ways to pray for each other. As my kids entered their teen years, when there is a national event that requires prayer, I have chosen to pray as a family. It was super awkward at first, but now they expect it. It provides a great teaching opportunity as well as a reminder that God is the one who holds all things together.

I believe we are making a mistake if we wait for our teenagers to engage with us about the divisive issues of our day. As parents, we have the privilege of walking alongside them during these precious years. Let’s be intentional about increasing our relational influence now to better prepare them for the unknown events that are ahead.