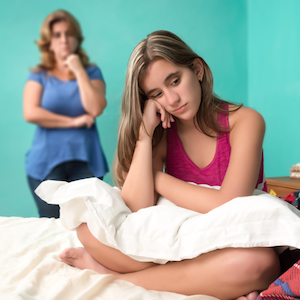 I’m not sure if it’s because more American young people actually don’t believe, or if it’s simply because our culture applauds this mindset, but I’m hearing the question more and more from today’s parents. It comes in many forms.

“What do I do when my 16-year-old doesn’t want to go to church anymore?”

“My 17-year-old claims he’s an atheist. How do I respond to that?”
Parenting has never been easy, but somehow it seems a little more difficult to raise kids in the truth when they are drowning in lies. And this job only becomes more difficult when “truth” is slowly being overtaken by “post-truth” thinking.

So how is Mom or Dad to respond when their 16-year-old announces, “Why do you make me go to church—I don’t even believe in this stuff!”

I’m choosing age 16 specifically because I think the answer to this question is much different than if the kid was 13, or even 18. A 13-year-old still needs lots of guidance and has about five years left under the care of his or her parents. Parents of young tweens and teens need to provide plenty of boundaries in equal supply to their bonding with that child.

And an 18-year-old could join the Marines or move in with friends… tomorrow! So all these parents might have left is bonding.

But 16 or 17-years-old is a unique time. They’re typically not mature enough to make their own decisions, but they are competing for independence at every opportunity. If Mom or Dad squeezes too tight at this age, the result is almost always rebellion. That, or their kids will just passive aggressively count their days until freedom. Either way, an excess of boundaries hurts bonding. I know, because I did it. It’s one of the parenting practices I wish I could do over.

So how is a Christian parent to respond when their kids push away from God or the church?

Here are 5 tips that I found have helped parents respond in both grace and truth:

Grace and Truth
Rebellion is often just a phase. Chances are, many of you went through a time where you pushed God away or had some sincere doubts.

It’s our job to parent our kid through times of belief and doubt. And your response can really make a difference. Freaking out will never help. Forcing our kids to listen to lectures will only make it worse. Showing unconditional love, on the other hand, will make a world of difference. Be a calm voice of consistency and reason in a shaky and irrational world.

The Word became flesh and made his dwelling among us. We have seen his glory, the glory of the one and only Son, who came from the Father, full of grace and truth. (John 1:14, NIV)

IF THIS ARTICLE WAS A HELP, THEN YOU’LL ALSO ENJOY JONATHAN’S BOOK,
IF I HAD A PARENTING DO OVER