Behind the Family Portrait 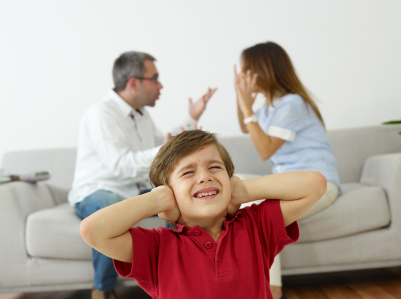 I always find the pictures on the front of parenting books a little unrealistic, only to the extent that many family portraits look unrealistic—the whole family at their best, smiling really big, arms around each other.

Don’t get me wrong, I’m not saying that most families are always unhappy and in constant conflict, but I think most people would agree that the family portrait isn’t necessarily a snapshot of real life in most homes.

What would that snapshot look like in your home right at this moment? What about at 8:00 tonight?

I’ll be the first to admit that my home isn’t all grins all the time. If you walked into my kitchen at 7:10 a.m. when three teenagers and two adults are scurrying around making lunches, woofing down a quick bowl of cereal, trying our best not to collide with each other… this family picture might look a little different. One parent straightening up a mess on the counter, another hurrying kids along so they won’t be late for school, two of the three kids usually snapping at each other about something.

“Well put it back next time! Sheeesh.”

Not quite the family portrait you hang over the mantel, but just the same a very typical “snapshot” of what many homes really look like in the morning.

What about the more embarrassing portraits? I shudder to think what that picture would look like during the times when I was completely off-the-charts angry, barking at one of my kids, or saying words to my wife that I’d regret later.

We don’t like to talk about those “snapshots,” do we?

I can’t help but think of a family portrait we all took a few years ago when my parents, my brother’s family and my family were all together on a family vacation. We were all in good spirits and even dressed up nice for the picture. As my dad began gathering the family together, my brother placed his video camera by the other camera’s tripod and hit record when no one was looking. The results are very amusing.

“Come on everyone, let’s get this picture while the light is still good.”

Kids were whining and complaining about having to wear nice clothes, men were barking out orders, the ladies were brushing dust off of kids’ sweaters with one hand while applying their own lipstick with another.

Eventually everyone got into their exact places. Kids still fidgeted, provoking each other, adults offered unwanted advice of where to stand. Finally, I barked one last order of “Enough! Now smile.”

The video is hilarious to watch now.

What would your videotape reveal?

If your home isn’t perfect… welcome to the club. Don’t worry, no home is. If the daily “snapshots” in your house don’t look like the typical family portrait, then you’re probably very normal.

Maybe you’ve never lost your temper with your kids. If your kid ever brought home a bad report card, maybe you didn’t overreact; instead you just stopped, prayed, then gave your daughter a noogie and took her to ice cream. Maybe you’re Mary freaking Poppins! If so… don’t bother reading my parenting book “If I Had A Parenting Do Over”, because I’m as imperfect as they get. But by God’s grace, I’ve somehow managed to build close relationships with my kids, trying to teach them lasting values along the way.