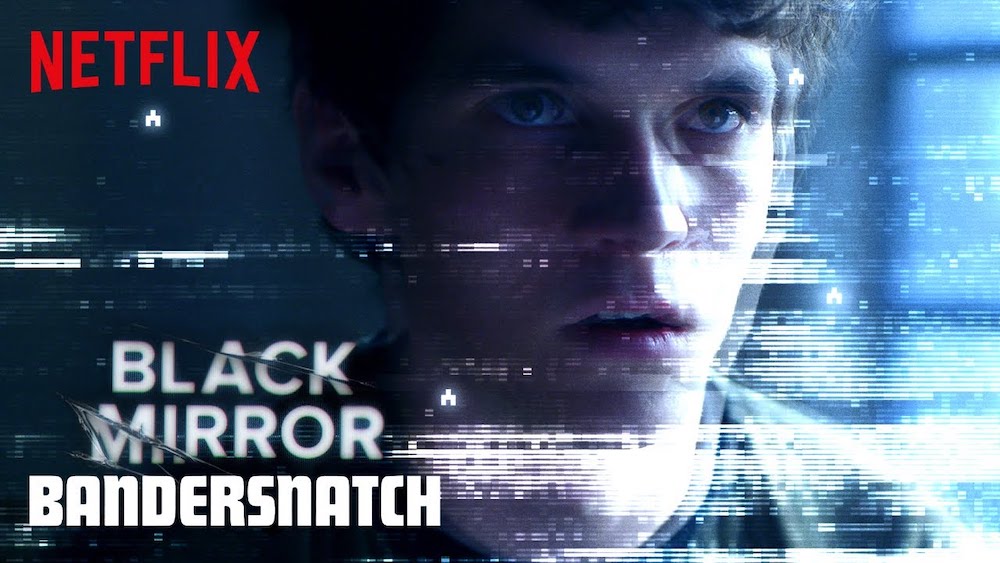 The following article is a guest post by our own TheSource4Parents Game Reviewer Naomi Norbez, helping parents know what to expect from this brand new Netflix show.

A Netflix original choose-your-own-adventure movie based on gaming?

As a gamer I couldn’t have been more excited when I first saw the release of Netflix’s Bandersnatch, a choose-your-own-adventure movie part of the series Black Mirror, a sci-fi anthology series.

Sadly, once I gave it a test spin, I was gravely disappointed.

In the game, a young man named Stefan is inspired to make a video game based on his favorite novel, Bandersnatch. You guide him through his journey of game development through conflicts with his parents, struggles with his producer, and degradation of his mental health. It looked like an interesting project. But after “playing” Bandersnatch, I found myself deeply disappointed in the production. Not only because it is one of the worst “interactive movies” I’ve ever played, but it proved morally irresponsible, offering a slew of terrible messages to creative teens along the way.

Let’s discuss them together, and in sharing them, we can decide whether you’d like to experience Bandersnatch with your kids.

It’s important to note Bandersnatch is rated TV-MA, and therefore Netflix expects a certain amount of maturity from its viewers. But while TV-MA, the content of its programming seems to be geared toward today’s teens who will relate to the main character (as well as nostalgic adults who will relate to being a teen in 1984). I find the things Bandersnatch tries to tell its audiences incredibly naïve and damaging to people of any age, but especially to artistic young people.

1. “True Art” is made by neglecting yourself
In order for Stefan’s game to be successful, the player must have him neglect his mental and physical health. This includes skipping out on therapy sessions, not taking medication, missing meals, and ignoring supportive people. If you do these things, Bandersnatch is a 5 out of 5 game. But if you take your medicine, go to therapy, or listen to your support network, you are told (through various bad endings) that Bandersnatch failed because you told Stefan to look after himself.

The message that “true art” is made from neglecting yourself is a pretty toxic message, especially for young artists. Not only is it false, it is a path that leads to burnout, depression, and worse art. Pretty irresponsible entertainment in a world where depression, anxiety and teen suicide is already at an unprecedented high.

2. Trust no one with your creative vision
If Stefan chooses to work on his Bandersnatch game with the Tuckersoft Company, his game gets a lukewarm reception. The best way to progress in Bandersnatch is to have Stefan work on his game alone. Furthermore, the player is encouraged to keep the game to themselves, and not discuss details of its creation with anyone.

It paints a false image of what being a creator is like. Yes, there are projects where one individual is the dominant creative voice. But they are never the only voice. There are programmers, artists, writers, musicians. There are the relatives and friends who voice support for your work. And there are the fans and critics who await its release.

Artists can’t completely isolate themselves. Life can be very difficult if you go it alone.

Bandersnatch shows Stefan as a one-man army, marching forward to release his dream project. Which leads me to the game’s last bad message. . .

3. Bad cycles are doomed to repeat
This is one of the only “true endings” in Bandersnatch. We learn that the novel Stefan is basing his game on was made by a man (Jerome F. Davies) who went mad and killed his wife. For Stefan’s Bandersnatch to be a 5 out of 5 game, Stefan must continue the cycle by killing his father and chopping up the body. After that, the game jumps to the present day, where a creator from 2019 is making a new Bandersnatch game, inspired by Stefan’s creation.

Trying to break the cycle—by not killing your father, talking to your therapist, taking your medicine, etc.—leads to a “bad ending.” Only by neglecting himself and continuing this cycle can Stefan make a good game, and inspire someone else to do the same.

There are a lot of bad cycles in life that kids can be exposed to, ranging from physically toxic ones like drugs or alcohol, to emotionally toxic ones like neglectful parents or abusive siblings. While in the cycle, it can feel like you are doomed to repeat it and continue the toxic patterns you were exposed to, but it can be broken with time and effort.

Bandersnatch teaches the message that anyone who enters the cycle created by Jerome—and later Stefan—is doomed to repeat it. It presents a cycle of hopelessness.

Three bad messages, and three things to discuss with your kids.

I’m not saying Bandersnatch isn’t for everyone—you’ll have to make that call. But it’s important for parents to teach their kids to observe media critically, and this is especially true for Bandersnatch and what it indirectly teaches the player.