6 Games That Could Change Your Kid’s (Or Your) Life 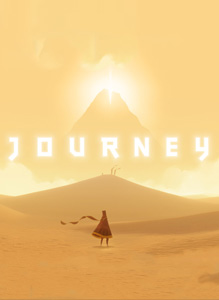 Video games have come a long way. About 30 years ago they had barely become anything more than simple, brief diversions, vying for your quarters in a crowded arcade. Since then, they’ve grown into a rather impressive art form garnering the attention of literally almost every single American kid.

Though video games still have a lot of maturing to do, they’ve already managed to deliver some works capable of impacting your life (dare I say, like a good book), making you pause and think.

In this article, we’re going to highlight (and even celebrate) some of these games. If you or your child haven’t played them, I recommend checking them out. Sure, a few hours on a game like Destiny with your friends is a lot of fun, but these particular games have the potential to make you and your kids think about life, and maybe even leave a permanent mark.

Journey is a game about… well, life. It’s a metaphorical journey to a far-off goal, and utilizing elements from the famous literary concept of the Hero’s Journey, it takes you through the highs and lows, the peaks and valleys of life, all the way until the end of it.

The game has absolutely gorgeous visuals, and the soundtrack was so good it became the first video game soundtrack to be nominated for a Grammy. But one of the things that really separates it from the pack it its use of multiplayer. As you play through the game, another traveler will show up. You can’t speak, only chirp unique little notes to each other, but you take this journey together, and develop a connection with this player.

To go into details about the journey itself would be saying too much, but I can say it’s easily analogous to life. You experience the good, the bad, the beautiful, the terrifying, the difficult, all with this other person at your side. Going through it once can be a strongly emotional, or even spiritual experience, allowing you to reflect on your life in light of this simple, beautiful portrayal of the human experience. Going through it again, however, puts you in the role of the teacher; whereas a mysterious stranger helped you before, now you can help others. It’s a powerful thing, and you may come out of it with a bit of a different perspective on what your life means and how you should live it.

Journey was a nonviolent, beautiful… well, journey, so let’s head into some darker territory. This one’s for the adults and the shooter fans.

Spec Ops: The Line starts off like a Call of Duty clone. This is, in fact, purposeful; it spends the first two hours of the game lulling you into a false sense of security. You begin to believe this is like every other shooter you’ve played.

It’s not. Spec Ops: The Line is a loose adaptation of Conrad’s Heart of Darkness, and once it establishes the familiar shooter formula, it starts chipping away at it. Are the enemies you’re fighting really your enemies? Is your violent entry actually making things better? Spec Ops puts you through the motions of the average shooter, but slowly starts revealing the insanity and violent depravity behind your actions.

In most video games, we justify our violence with heroism. It’s okay to kill these people; they’re trying to kill us, or even destroy the world! But the actions that normally equate to heroism in your average shooter lead you to do horrible things in Spec Ops. It really makes you rethink the logic behind the violence you commit in these games. And when the game tells you, “The truth is that you’re here because you wanted to feel like something you’re not: A hero,” you quickly realize that it’s not only about the protagonist; this game is talking to you directly.

The game indicts the very idea that we would derive a feeling of power from killing. And it does it by fulfilling that power fantasy, then showing you just how depraved it truly is. It’s a heavily convicting experience, and conviction is a powerful catalyst for positive change.

Passage is free to download and only takes about five minutes of your time. So it’s hard not to recommend.

In concept, this game is similar to Journey; a brief retelling of the human experience. But whereas Journey focused on the ups and downs of life and the power of companionship, Passage’s message is about the value of what little time we have in this life. Since it’s so brief, I can’t really talk about how it can change your life without spoiling it, but its brevity also means you could play it right now; so I recommend you just do that real quick. In any case, you have been warned.

Passage is just a little maze where you can explore and get treasure chests, which add to your score. But you notice that as you go through this maze, your character ages. You start off as a kid, then grow into an adult. Around this time, you pick up a female character as well. The game is so simple, and kind of melancholy, that you appreciate the presence of this other character. But she also makes it harder to fit into some of the areas of the maze; you can’t get all the treasure you once did. As you continue, you both grow older, and your movement gets slower. Eventually, she disappears, a gravestone marking the place where she stopped. And eventually, the same happens to you. Your score from the treasure chests is not recorded; your passage through life was a good one, but you eventually reached the same end as everyone else, and your material gain is meaningless.

That’s not even mentioning the symbolism embedded in nearly every design choice of the game. It all comes together to create a brief reflection on the very concept of life. You’ll come out of it rethinking what you value and how you spend your time, and it could kick off some great conversations with your kid.

Choices are a powerful thing. A good game with story choices can make you really think about yourself and your values. Telltale’s The Walking Dead is quite possibly the greatest accomplishment yet in this regard.

Season 1 of The Walking Dead puts you in the role of a man who, at the beginning of the zombie infestation, comes across a young girl. Taking it upon himself to protect her, he goes through all the dangers of the zombie apocalypse with this girl under his care.

The thing that makes it unique is that it puts the story in your hands. Consistent with the themes of The Walking Dead franchise, this disaster pushes people to the brink of what they can cope with, and you make a lot of difficult decisions regarding these issues.

The result is one of the most well-written and downright human stories I’ve ever experienced. Season 1, as a whole, asked me to consider this girl under my protection, and decide how best to prepare her for the difficult life that follows while also protecting her, trying to keep her humanity intact. Season 2 asked me to look inevitability in the eye and come out of it a changed person. And I did. These games, more than any other, have forced me to look into myself and decide what I believe, what I’m capable of, and how my morals interact with my actions. It’s a powerful experience that will not only leave you asking some difficult questions, but leave you with the answers to those questions.

Minecraft has already changed a lot. It completely redefined how independent game development worked, became the biggest gaming icon since Mario, and is possibly the most versatile video game ever made.

But the biggest impact of Minecraft will probably not be felt for a while. And it’s something that will probably make you want your kid playing this game.

Video games have, since their inception, been trying to figure out how to immediately grab people. They don’t to lose the player’s attention, so they often resort to a lot of instant gratification to keep people engaged. Minecraft, however, does none of this. In fact, the first few hours playing Minecraftare usually the hardest; it’s an incredible game, but it takes time to learn and appreciate. All the great stuff Minecraft has to offer takes a lot of time and work to achieve.

And yet, it has captured the imagination of innumerable children. A game based on slow, methodical work and a high requirement for imagination has become one of the most popular games ever made, and children love it.

If you’re like me, you’re imagining what could be accomplished with a generation of kids who grew up playing a game that requires that kind of imagination, patience, and hard work. And the thought is really exciting.

This is a game that says something unique about you. It speaks to any individual who plays it about how they, specifically, handle loneliness. And, like Passage, it’s simple and only takes a minute. Seriously, you can go ahead and play it now if you like, before I go into detail.

The game just has you as a dot, moving up a screen. You come across other dots, but if you move close to them, they move away and off the screen. And this continues until you reach the end. There’s a message about children in third-world countries at the end, but believe it or not, that’s not the most powerful thing about the game.

The game is very simple, and plays out the same way regardless of what you do or who plays it. But what does change is how every individual person approaches it.

Did you chase after every group, hoping you would eventually be accepted? Did you just run straight through, not caring about the others around you? Or did you start avoiding them, thinking they’ll just run off and reject you like all the others? There are a lot of approaches one can take to this, and they all say something about us. It’s surprising how insightful such a simple little game can be, and how much we can learn about ourselves from playing it.

Final Thoughts
These are just a few of the most powerful examples of games that could help you and your kids look at yourself more honestly and even learn something. It’s pretty amazing what can be accomplished when you combine the life-changing ability of art with the interactive nature of a game, and these are some of the best examples.

If any of these sound interesting to you, I highly suggest you check them out; and, if appropriate, do so with your kids. In a world where the newest Grand Theft Auto game always becomes the biggest seller among young people, we could use a few more positive video games.

What do you think of these games?

What are other games that had a positive impact on you or your family?