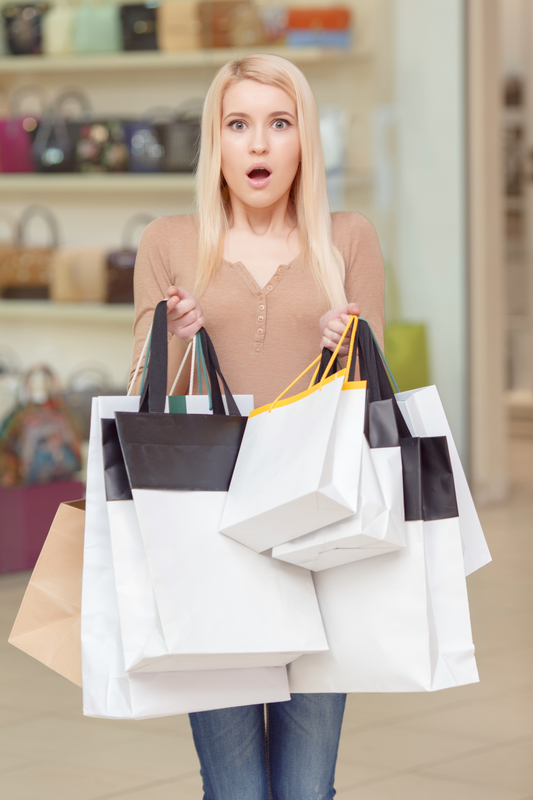 This week Gen Y experts at YPulse surveyed Gen Z and Millennials age 13-36 asking what they would buy with $500 dollars. And do you know what the number one answer was?

I bet you thought it was the new iPhone, didn’t you?

The number one answer was actually: Savings. In fact, here are the top 10 answers:

I’m sure the list might have looked a little different if they had only asked 13-17-year-olds who haven’t experience “adulting” yet, but when you include “on their own” young people into the mix, answers hinted toward mere survival and making ends meet. I don’t think many adults would make fun of this list.

The question is, do today’s young people know how to actually earn, pay bills, save and survive in the real world? Better yet, has anyone taught them to do this?

Here are 5 facts that parents might consider teaching their kids about managing their money while still in the home—including some sample budgets:

One of the best principles that helps me think twice about my spending is remembering that my money isn’t even my money. Anything I’ve earned is from God in the first place—I simply manage it. And at bare minimum I’m going to give the first 10% of what I earn to Him (Deuteronomy, Chapter 26), but maybe even more, depending on what God lays on my heart to give cheerfully (II Corinthians 9:6-9) because it’s all His anyway.

When my kids were small I gave then an allowance of $1 a week and paid it to them in dimes. I taught them to give one dime back to God and then save one dime… which leads me to my second point…

When many people get their paychecks they pay all their bills, but they don’t even pay themselves. We need to teach out kids to not let every dime slip through their fingers with nothing to show for it. Pay yourself at least 10% in a savings account for the future.

When I graduated from college I began working for a financial planning firm and took estate-planning classes. One of the first illustrations I was taught was the example of the two brothers who saved for retirement. One brother saved $200 per month starting at age 25 to age 34, then stopped after saving for only 10 years and simply let his investment grow for 30 years, compounding the interest until age 65. The second brother didn’t start saving until age 35, the same amount per month, $200, and saved for 30 years until age 65.

Which brother has more money at age 65?

Surprisingly the first brother ends up with more, even though he put away only one third as much. (See example to the right at an average of 7% interest.)

I’ve seen multiple versions of this example, including this one by Dave Ramsey (Yikes, he has you start saving at age 19!) It’s the power of compounding interest.

I’ve seen plenty of examples of this story, including ones where the first person keeps saving the entire time (that’s what my wife Lori and I did, but we didn’t start until age 27).

How are our kids going to know the power of compounding interest if we don’t tell them to pay themselves?

But saving isn’t the only important principle.

The man masquerades himself in many guises, but his most favorite role is as the credit card company, luring us to buy now and pay later.

What most young people don’t realize is that when we splurge now we actually earn less. We are giving ourselves the opposite of a raise. We’re lowering our income by X number of dollars per month because now we are paying “the man” interest because we wanted that new pair of shoes or X-box.

This is hard because we live in a “life is short,” “get it now,” “just do you”culture. The problem is, we’re always going to want something now, and if we constantly buy nowand pay later, we’re actually going to have less spending power in the future.

We need to teach our kids to come up with the cash first for these kinds of purchases. Only borrow for houses and 0-interest loans on cars. We don’t need to go into “only borrowing on appreciating assets” until they’re old enough to understand. So start with “cash first, unless you’re buying a house” (some would disagree about borrowing for a car- I think it’s fine if you have the monthly income and can get a 0-interest loan). This principle will save them from burying themselves in debt for years to come.

Just scroll back up and take a second peek at that list of what today’s young people would buy with $500. Today’s young people are feeling the importance of saving, and paying off debt. Why? They want to “adult.” They want to be on their own. And many of these young people have figured out (the hard way) it’s almost impossible to live on your own when you’re still paying “the man” back for that one time they went on a crazy shopping binge at Anthropology! Not to mention, if their car needed brakes, which leads me to another principle…

Cars will break down, the dog will destroy the carpet when you leave him alone in the guest room, and your new job will require you to go buy a new outfit. This is the stuff you can’t plan for, unless you plan for it.

Make it an item in your budget. Literally call it “unexpected.” It should probably be at least $100 a month. And if you don’t use it one month, save it for the next month when you’ll probably need $200.

People don’t plan to fail; they fail to plan.

We need to teach our kids to make a budget. At age 10 that might be as simple as give a dime in the offering, save a dime, spend 80 cents. But as they get to high school it can grow into something a little more complex with car savings, college savings, phone bills and other items of responsibility they are taught to plan for.

Here’s a simple budget for a teen guy working part time during his senior year: 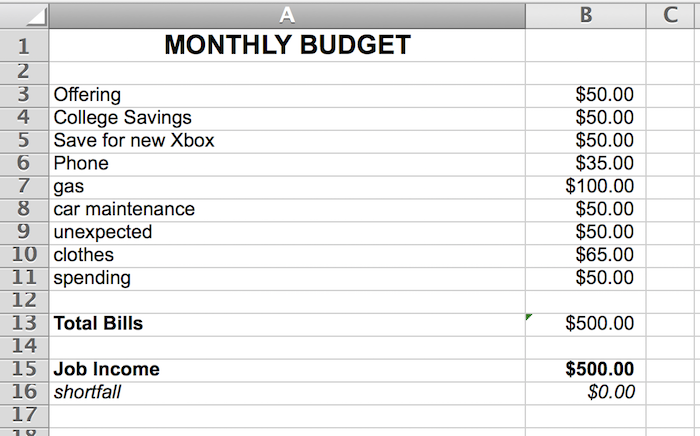 When our kids get out on their own their budgets will get a little more complex. Not only the wake up call of items like rentor utilities, but also the normal expenses that life throws at us, like a car maintenance fund for when registration is due (is your car registration $240? Are you saving $20 a month for that?)

I spend quite a bit of time talking with young couples about realistic budgeting before they get married. Most young couples don’t think about the fact that they need a haircut or want to buy members of their family a Christmas present. Do they budget for these?

Do they want a dog? Do they plan on feeding it? What about giving it flea protection? A bone to chew on… instead of the couch? How much does this add up to per month?

Here’s a sample budget I made with a young couple I met with for marriage counseling:

Are we teaching our kids to budget and plan ahead?

More importantly, are we modeling these principles ourselves?

How are you managing HIS money?