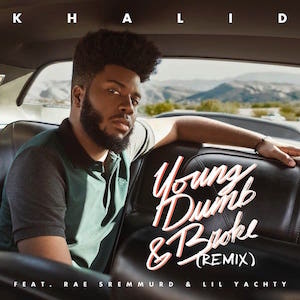 Main Point: Often the message teenagers get is if it makes you happy, do it and live young, wild and free. This can lead teens to spend their youth chasing pleasures instead of reaching higher and making their mark for God. Does God expect teenagers to be young, dumb, and broke, or is there something more to live for?

Introducing the Song:
Khalid describes the song in this way, “For me it was about turning the negative connotation of young, dumb and broke and being like this is who I am. This is who I will have been. But I have so much love to give, I have so much fun to have. It was my ode to my graduation.” The video features Khalid on his last day in High School. It’s an upbeat and fun song, but does his perspective reflect how High School students should view this season in their lives?

The Music Video: The music video can be viewed for free at
https://www.youtube.com/watch?v=IPfJnp1guPc

So you’re still thinking of me.
Just like I know you should.
I cannot give you everything, you know I wish I could.

I’m so high at the moment?I’m so caught up in this
Yeah, we’re just young, dumb and broke
But we still got love to give
[Chorus]
While we’re young dumb

A: Khalid will be twenty in February of 2018, and is looking back at his High School days. In the video he is attempting to capture his last day of High School.

Q: What is he trying to say in this song?

A: When you’re in High School, you are young dumb and broke, so you should just give love and have fun. That’s what High School is for.

Q: Do I recognize some people in that video?

A: In the beginning, you’ll notice Dennis Haskins who played Mr. Belding in Saved by the Bell, and toward the end the janitor is Wayne Brady from Whose Line is it Anyway, Let’s Make a Deal, and the Wayne Brady Show.

Where to Take It from Here: Wherever it feels natural. If these questions lead to a longer discussion on the topic, wonderful! (There is a guide just after that paragraph that helps you do just that.) If your kids are barely uttering grunts, don’t get discouraged – the next time it feels right, try out another song. Keep engaging them

Transitional Statement – Say something like this:
Khalid is a young man who has just finished his high school years, giving him relatability in the things he sings about. He sings with confidence throughout this song, saying things such as, “so you’re still thinking of me, just like I know you should” and “You always say I’m wrong, I’m pretty sure I’m right.” The tune is catchy, and the lyrics are pointed, but are the things he sings about true? Are the teenage years about carefree living and just “giving love” as Khalid says? Or is there something more?

Let’s talk about this a bit and then look and see what God’s Word says on the subject.

Remember your Creator in the days of your youth, before the days of trouble come and the years approach when you will say, “I find no pleasure in them.

Be very careful, then, how you live—not as unwise but as wise.

Wrap Up:
During this time, we listened to Khalid’s R&B song “Young Dumb & Broke.” We heard him sing about making choices with minimal concern for consequences because that’s just part of being young.

Khalid isn’t trying to convince people to live this way. He just assumes this is how teenagers will live. It seems right to him. Proverbs 14:12 says;

There is a way that appears to be right, but in the end it leads to death

The word translated death can also mean destruction. There is a way that will seem right, but in the end it won’t take you where you want to go. Can you think of something in your life that has seemed right, but ultimately didn’t end up taking you where you thought it would?

It is easy to hear catchy fun songs like Young Dumb & Broke and allow the sense of relatability to keep us from engaging further with the message. The irony here is this song was written by a guy who is young, but clearly not dumb or broke! Hopefully during this time, you have been able to think through what is being communicated in this song and considered if you believe it represents your generation, or if there is something more to strive toward. The truth is God never puts limits on age when it comes to making your mark for Him. He calls young people to remember Him in their youth and live carefully with wisdom because He knows there are things that will easily distract from living the life He has created you for. When God says don’t, He means don’t hurt yourself. There are things that seem harmless, but in the end lead you to a place God never wanted you to go. Let His love guide you toward a higher way to live. Let your youth be spent pursuing the One who made you, loves you, and wants you to be involved in His work. Make your mark for God now!