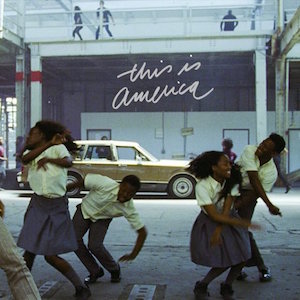 Main Point: When we look around and see the brokenness of this world, it can lead us to pursue things with the hope they will distract us from the chaos. This is America looks at the ways we ignore significant issues while emphasizing trivial things. What is the role of a follower of Jesus during these times? How can we avoid missing the opportunity to engage the culture with the hope that comes from Jesus?

Introducing the Song:
Due to the popularity of the video, the focus of this review will be on the meaning of the song as interpreted by the video. The video is intended to be open to interpretation. One review says by refusing to provide the world with neither context nor any further explanation, he allows us all to assess our understanding of systematic oppression and violence – and he does so without inflammatory rhetoric or fallacies. While people might interpret the video differently, it is a powerful piece that can be used to provoke conversations that could prove to be extremely valuable.

In a culture that continues to celebrate gun violence in music and media, here is a resource to continue that discussion: http://www.jonathanmckeewrites.com/archive/2018/02/26/gunning-your-kids-down.aspx

The Music Video: The music video can be viewed for free at
https://www.youtube.com/watch?v=VYOjWnS4cMY

I know you wanna party
Party just for me
Girl, you got me dancin’
Dance and shake the frame

This is America (skrrt, skrrt, woo)
Don’t catch you slippin’ now (ayy)
Look how I’m livin’ now
Police be trippin’ now (woo)
Yeah, this is America (woo, ayy)
Guns in my area (word, my area)
I got the strap (ayy, ayy)
I gotta carry ‘em

Q: In his video, what do you think Childish Gambino is trying to say about gun control?

A: This is open to interpretation but could start a conversation about the human heart. No matter where you stand on gun control, it’s clear from God’s Word that our hearts are not good on their own (Jeremiah 17:9, Romans 3:10).

Q: If resources were not an issue, what is something that is broken in our world that you would like to see fixed?

A: This is a great way to hear their heart about an injustice in this world.

Q: What do you think followers of Jesus should do when the culture is debating something like gun control or racism? How should they respond?

A: This is a great opportunity to talk about how Jesus responded to others, with grace and understanding. Followers of Jesus should seek understanding and balance their responses with grace and truth as opposed to being argumentative. Consider using:

Fools find no pleasure in understanding but delight in airing their own opinions.

Where to Take It from Here:
Wherever it feels natural. If these questions lead to a longer discussion on the topic, wonderful! (There is a guide just after that paragraph that helps you do just that.) If your kids are barely uttering grunts, don’t get discouraged – the next time it feels right, try out another song. Keep engaging them

Transitional Statement – Say something like this:
Childish Gambino raises some strong points about the diversions that can keep us from engaging in the issues of our day. In the video, his dancing and other foreground events serve as a distraction from the events occurring in the background. This reflects how he sees our culture as focusing on less significant issues, especially those that he believes affect black society in America. He sees culture as focusing on lesser things while ignoring the events going on behind the noise. As followers of Jesus, we are called to engage culture with justice, mercy, and humility. The world will continue to be broken until Jesus returns, but we play a role in the restoration of all things. Considering the strong message of this video, how can we be people who humbly seek to understand the issues of our day and approach them with a heart for justice and acts of mercy?

He has shown you, O mortal, what is good. And what does the Lord require of you? To act justly and to love mercy and to walk humbly with your God.

I have told you these things so that in me you may have peace. In this world you will have trouble, but take heart! I have overcome the world.

Wrap Up:
During this time, we listened to Childish Gambino sing about America today. He sings of the things we focus on such as being fitted (dressing well), cell phones (this is a celly), hunnid bands (having many hundred dollar bills), and even contraband (drugs). While he sings of these things, there are symbols in the background of disease, rioting, and even the apocalypse. Then as Gambino lights up his marijuana after a 17 second pause (perhaps a reference to the Parkland school shooting), the song moves to a pointed line which says:

He seems to be saying that despite the things going on in the world, we tend to focus on things such as social media, clothes, technology, and money. Whether or not you agree with his message, or even if you hear it differently, the question remains:

What are the things you focus on that serve as a distraction, and cause you to miss out on how God might be calling you to engage in the world around you?

As we look at Micah 6:8, we see that God has shown us what is good, and has called us to three things. He desires that we act justly, love mercy and walk humbly with God. Justice is about fair treatment according to God’s standards, mercy is when one does not get what they deserve, and walking humbly is about following Jesus while having a proper view of yourself.

What would happen in this world if followers of Jesus lived in a way that embraced these three things?

It is so easy sometimes to disengage from a world with complex problems, or even to take a stand on something without being fully informed. It doesn’t appear from God’s Word that Jesus is calling believers to fix the world’s problems or even to correct others. Jesus makes it clear that only He has overcome the world. Only He is able to give the world what it needs. Jesus calls believers to take heart while trusting Him, to act justly as lovers of mercy who walk humbly with Him.

Whatever you think of Gambino’s representation of America, you can be confident that there is a God who is active and at work today. He is calling His people to walk after Him in humility and passionately follow after Him, refusing to let the shiny things in this world distract them from seeking and following Him above all things. Let’s take some time and pray, asking God to help us to cling to Him while living out Micah 6:8.