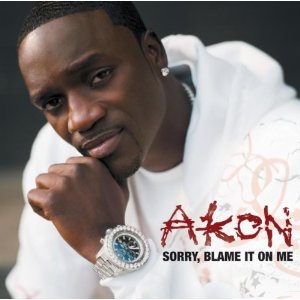 The Song: “Sorry, Blame It on Me” by Akon

Main Point of Discussion: When we mess up and make mistakes, we need to admit them, correct them, and move on.

The Music Video:
The song’s video can be found at the following link: http://www.youtube.com/watch?v=ynMk2EwRi4Q

A: Akon is sorry and takes the blame for the bad things he’s done in his life—then he turns things around, singing that he’ll also “take the blame” for others’ mistakes in regard to the incident with the underage girl at the club (for which he actually accepts little or no responsibility).

A: It’s mixed. Akon is right to take ownership of his past sins—but he absolves himself of responsibility for performing on stage a simulated sex-act with a female audience member who turned out to be underage. As Christians we should be wary of Akon’s message—the fact that he performed this act is, in itself, sinful. He’s correct that others bear the responsibility (i.e., the girl’s father, the club that let her in), but he’s also responsible. He hasn’t removed the “plank” from his own eye yet.

A: This song opens up the door to help us all closely examine our motives and shine a giant searchlight into the depths of our hearts. The point being: If there’s even a speck of sin in us, there’s sin in us.

All sin in us that we know of, no matter how small or seemingly insignificant, must be confessed to God. If as part of a group “sin,” we must bear our portion of the responsibility, come clean, and repent.

For Deeper Discussion: (If your kids seem into diving in deeper and looking at what the Bible has to say on the subject, the following discussion guide can help take you there.)

Transitional Statement:
Talk to family members about why they think this song is so popular and it seems to connect with so many people. Then say something like: “I’m Sorry, Blame it on Me” shows a different side to most of the hip hop music out there, see if you can pick them out.

Say Something Like:
The Bible talks a lot about personal responsibility and blame, and we’re going to look at a story of a man who followed God with his whole heart and blew it bigger than you would ever think possible. Let’s see what happened.

In the spring of the year, when kings normally go out to war, David sent Joab and the Israelite army to fight the Ammonites. They destroyed the Ammonite army and laid siege to the city of Rabbah. However, David stayed behind in Jerusalem.

Late one afternoon, after his midday rest, David got out of bed and was walking on the roof of the palace. As he looked out over the city, he noticed a woman of unusual beauty taking a bath. He sent someone to find out who she was, and he was told, “She is Bathsheba, the daughter of Eliam and the wife of Uriah the Hittite.” Then David sent messengers to get her; and when she came to the palace, he slept with her. She had just completed the purification rites after having her menstrual period. Then she returned home. Later, when Bathsheba discovered that she was pregnant, she sent David a message, saying, “I’m pregnant.”

Then David sent word to Joab: “Send me Uriah the Hittite.” So Joab sent him to David. When Uriah arrived, David asked him how Joab and the army were getting along and how the war was progressing. Then he told Uriah, “Go on home and relax” David even sent a gift to Uriah after he had left the palace. But Uriah didn’t go home. He slept that night at the palace entrance with the king’s palace guard.

When David heard that Uriah had not gone home, he summoned him and asked, “What’s the matter? Why didn’t you go home last night after being away for so long?”

Uriah replied, “The Ark and the armies of Israel and Judah are living in tents, and Joab and my master’s men are camping in the open fields. How could I go home to wine and dine and sleep with my wife? I swear that I would never do such a thing.”

“Well, stay here today,” David told him, “and tomorrow you may return to the army.” So Uriah stayed in Jerusalem that day and the next. Then David invited him to dinner and got him drunk. But even then he couldn’t get Uriah to go home to his wife. Again he slept at the palace entrance with the king’s palace guard.

So the next morning David wrote a letter to Joab and gave it to Uriah to deliver. The letter instructed Joab, “Station Uriah on the front lines where the battle is fiercest. Then pull back so that he will be killed.” So Joab assigned Uriah to a spot close to the city wall where he knew the enemy’s strongest men were fighting. And when the enemy soldiers came out of the city to fight, Uriah the Hittite was killed along with several other Israelite soldiers.

Then Joab sent a battle report to David. He told his messenger, “Report all the news of the battle to the king. But he might get angry and ask, ‘Why did the troops go so close to the city? Didn’t they know there would be shooting from the walls? Wasn’t Abimelech son of Gideon killed at Thebez by a woman who threw a millstone down on him from the wall? Why would you get so close to the wall?’ Then tell him, ‘Uriah the Hittite was killed, too.’”

So the messenger went to Jerusalem and gave a complete report to David. “The enemy came out against us in the open fields,” he said. “And as we chased them back to the city gate, the archers on the wall shot arrows at us. Some of the king’s men were killed, including Uriah the Hittite.”

“Well, tell Joab not to be discouraged,” David said. “The sword devours this one today and that one tomorrow! Fight harder next time, and conquer the city!”

When Uriah’s wife heard that her husband was dead, she mourned for him. When the period of mourning was over, David sent for her and brought her to the palace, and she became one of his wives. Then she gave birth to a son. But the LORD was displeased with what David had done.

Say Something Like:
With all of David’s influence and power, he probably thought his sin would never catch up with him, but he forgot about Someone who has infinitely more power and influence—the God of the universe.

So the LORD sent Nathan the prophet to tell David this story: “There were two men in a certain town. One was rich, and one was poor. The rich man owned a great many sheep and cattle. The poor man owned nothing but one little lamb he had bought. He raised that little lamb, and it grew up with his children. It ate from the man’s own plate and drank from his cup. He cuddled it in his arms like a baby daughter. One day a guest arrived at the home of the rich man. But instead of killing an animal from his own flock or herd, he took the poor man’s lamb and killed it and prepared it for his guest.”

David was furious. “As surely as the LORD lives,” he vowed, “any man who would do such a thing deserves to die! He must repay four lambs to the poor man for the one he stole and for having no pity.”

Then Nathan said to David, “You are that man! The LORD, the God of Israel, says: I anointed you king of Israel and saved you from the power of Saul. I gave you your master’s house and his wives and the kingdoms of Israel and Judah. And if that had not been enough, I would have given you much, much more. Why, then, have you despised the word of the LORD and done this horrible deed? For you have murdered Uriah the Hittite with the sword of the Ammonites and stolen his wife. From this time on, your family will live by the sword because you have despised me by taking Uriah’s wife to be your own.

“This is what the LORD says: Because of what you have done, I will cause your own household to rebel against you. I will give your wives to another man before your very eyes, and he will go to bed with them in public view. You did it secretly, but I will make this happen to you openly in the sight of all Israel.”

Then David confessed to Nathan, “I have sinned against the LORD.”

Nathan replied, “Yes, but the LORD has forgiven you, and you won’t die for this sin. Nevertheless, because you have shown utter contempt for the LORD by doing this, your child will die.”

Wrap Up:
Tonight we talked about an Akon song that showed a very different side of hip-hop—taking responsibility for mistakes—and read a story from the Bible that shows how our mistakes bring consequences. Tonight I want to give you a chance to think about areas in your life you might need to own up to, and people you might need to approach and ask forgiveness from.
Pass out note cards and writing utensils and give your family members some time to write their own versions of “Sorry, Blame it on Me.” Encourage them to go to the people they named in the song and ask for forgiveness. Give them a chance to reflect and pray in silence for a few minutes.