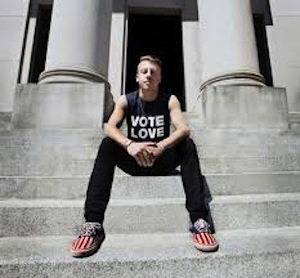 The Song: Same Love by Macklemore and Ryan Lewis

IMPORTANT NOTE TO PARENTS: We at The Source for Youth Ministry believe that certain elements in our youth culture can serve as good discussion jump starters with students. At the same time, we would never hope to introduce teens to a negative influence that they haven’t already encountered. This balance is a delicate one. In our experience most teens, churched and unchurched, keep pretty current with music and music videos like this one. Thanks to YouTube, MTV.com, and iTunes, the most popular music videos and songs are free to access only a click away. If you decide to use this, do so by catering it to fit your family’s needs.

*NOTE FOR PARENTS:
This is clearly a very high profile and sensitive subject in our society right now. It is extremely important to be careful with what you say during this discussion and to make sure that you conduct the discussion in a manner that communicates love and care for everyone involved.

Scripture is just as clear regarding same-gender sexual sin as it is regarding opposite-gender sexual sin; they’re both sinful; God isn’t cool with either action. Unfortunately the church has justifiably gained a reputation as a gay-hating institution by, among other things, stigmatizing homosexual sin (and homosexuality in general) to a far greater extent. For more helpful info on dealing with homosexuality, check out this TRAINING TOOL.

Introducing the Song:
Macklemore and Ryan Lewis performed this song at the 2013 MTV VMAs where it won “Best Video with a Social Message.” It also rose as high as #15 on Billboard Charts and #12 on iTunes. That means, you have probably heard this song. The song is moving and emotional, but how does it compare with biblical truth? Let’s listen to the song and then see what you think.

The Music Video:
The official music video can be found here: http://www.youtube.com/watch?v=hlVBg7_08n0.
(You may need to screen this video first. There are some scenes that church leaders may find offensive.)

When I was in the third grade I thought that I was gay,
‘Cause I could draw, my uncle was, and I kept my room straight.
I told my mom, tears rushing down my face
She’s like “Ben you’ve loved girls since before pre-k, trippin’ ”
Yeah, I guess she had a point, didn’t she?
Bunch of stereotypes all in my head.
I remember doing the math like, “Yeah, I’m good at little league”
A preconceived idea of what it all meant
For those that liked the same sex
Had the characteristics
The right wing conservatives think it’s a decision
And you can be cured with some treatment and religion
Man-made rewiring of a predisposition
Playing God, aw nah here we go
America the brave still fears what we don’t know
And God loves all his children, is somehow forgotten
But we paraphrase a book written thirty-five-hundred years ago
I don’t know

If I was gay, I would think hip-hop hates me
Have you read the YouTube comments lately?
“Man, that’s gay” gets dropped on the daily
We become so numb to what we’re saying
A culture founded from oppression
Yet we don’t have acceptance for ’em
Call each other faggots behind the keys of a message board
A word rooted in hate, yet our genre still ignores it
Gay is synonymous with the lesser
It’s the same hate that’s caused wars from religion
Gender to skin color, the complexion of your pigment
The same fight that led people to walk outs and sit ins
It’s human rights for everybody, there is no difference!
Live on and be yourself
When I was at church they taught me something else
If you preach hate at the service those words aren’t anointed
That holy water that you soak in has been poisoned
When everyone else is more comfortable remaining voiceless
Rather than fighting for humans that have had their rights stolen
I might not be the same, but that’s not important
No freedom till we’re equal, damn right I support it

We press play, don’t press pause
Progress, march on
With the veil over our eyes
We turn our back on the cause
Till the day that my uncles can be united by law
When kids are walking ’round the hallway plagued by pain in their heart
A world so hateful some would rather die than be who they are
And a certificate on paper isn’t gonna solve it all
But it’s a damn good place to start
No law is gonna change us
We have to change us
Whatever God you believe in
We come from the same one
Strip away the fear
Underneath it’s all the same love
About time that we raised up… sex

Q: What was the main message in Macklemore’s song?
A: His message focused on equality for homosexuals, gays, and lesbians. In one sense, he wants the laws to change, but in another sense, he knows that “no law is gonna change us.”

Q: What were some of the good, solid, healthy messages that you heard in the song?
A: He sang about the need to stand up for those who are oppressed and those who “have their rights stolen.” He argues that we should defend the helpless and downtrodden, not stereotype others. We should love everyone and fight against hate.

Transitional Statement:
Macklemore’s song supports the (now) widespread notion that romantic love between homosexuals should be treated exactly the “same” as the love that heterosexual couples have for one another. But in his support of homosexuality, he also has some less-than-flattering things to say about The Church. In spite of his poor view of The Church or the Bible, Christians must love homosexuals with the love of Christ. Let’s discuss these ideas some more.

Transition Statement:
Some Christians have earned this poor reputation by elevating the sin of homosexuality above all others. We’ve been so vocal and harsh when talking about it in the past, that to the outside world, we’ve come across as very judgmental and condemning. Some even label Christians as “anti-gay.” Does it have to be that way though? Is it possible to love the LGBT community without compromising God’s truth on the matter?

2 At dawn he appeared again in the temple courts, where all the people gathered around him, and he sat down to teach them. 3 The teachers of the law and the Pharisees brought in a woman caught in adultery. They made her stand before the group 4 and said to Jesus, “Teacher, this woman was caught in the act of adultery. 5 In the Law Moses commanded us to stone such women. Now what do you say?” 6 They were using this question as a trap, in order to have a basis for accusing him.

But Jesus bent down and started to write on the ground with his finger. 7 When they kept on questioning him, he straightened up and said to them, “Let any one of you who is without sin be the first to throw a stone at her.” 8 Again he stooped down and wrote on the ground.

9 At this, those who heard began to go away one at a time, the older ones first, until only Jesus was left, with the woman still standing there. 10 Jesus straightened up and asked her, “Woman, where are they? Has no one condemned you?”

“Then neither do I condemn you,” Jesus declared. “Go now and leave your life of sin.”

Wrap Up:
In the charged atmosphere that exists today, a false dichotomy has developed. In most of the discourse on this issue, the unnecessary choice that is presented is that you are either (a) fully supportive of homosexuality and recognize it as a morally acceptable lifestyle or (b) you are a homophobe and a bigot, who hates gays.

Let’s be honest for a moment here and admit that while it may not be completely our fault, Christians have done a lot to create this environment. Some Christians have helped contribute to this perception by being unnecessarily harsh, judgmental, or condemning in their words and actions towards the LGBT community. They’ve also created this atmosphere by treating homosexuality as if it is some unpardonable sin that is worse than any other sin, much like the Pharisees treated adultery in the story we just read.

Jesus doesn’t react that way though. He responds to the Pharisees by saying “let any of you who are without sin, cast the first stone.” In other words, He reminds us that all sin is equal and that all of us are sinners. The woman’s sin is no worse than their sins of pride, or lust, or greed, etc. The Bible does make it clear that homosexuality is a sexual sin, but it’s simply ONE kind of sin among many (1 Cor. 6:9-11). We should respond to the LGBT community with the same attitude of love and grace that Christ showed the woman in our story.

Despite what most people are telling us, we don’t have to make a choice between rejecting God’s design for sex and being a homophobe (someone who hates or fears homosexuals).

At the same time, this does not mean that we have to compromise on what we believe to be God’s truth. It doesn’t mean that we should rationalize people’s sins or that we should lie and tell people that something is okay, when the Bible clearly says that it isn’t. Jesus didn’t do this either.

Jesus had this magnificent way of letting people know that they were loved, accepted, and forgiven by Him, while still being real with them about their shortcomings.

I wonder what a difference it would make for the Kingdom of God if Christians learned to treat the LGBT community with this kind of love. What if gays and lesbians felt more love and acceptance from The Church than they did from Macklemore and LGBT groups? What if they knew that the one group who would treat them with dignity and respect, despite whether or not they agreed with their choices, was Christians? What if they knew that Christians would stand up for those among them who were picked on and bullied at school?

If we could learn to love the LGBT community in this way—in the way that Christ did—maybe instead of feeling hatred and condemnation in The Church, homosexuals would find and experience the transforming love and truth of Christ that this woman in John 8 did.

That is what Jesus wants!