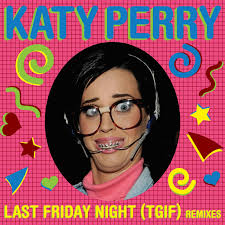 Main Point of Discussion: Avoid evil; be holy because God is holy.

Introducing the Song
We’re about to take a deeper look at the worldview behind the big pop song “Last Friday Night (T.G.I.F.).” It’s a tune you guys are probably already familiar with—and it contains a lot of pretty raw subject matter, as well as words. We’ll get to all of that during our discussion, but let’s agree together, here and now, to keep our minds and eyes and ears focused on the quest for truth as we check out the song in more detail. (Pass out the lyrics and play the song.)

[bridge]
[chorus]
This Friday night, do it all again

[chorus]
Three Simple Questions (with Answers You May Be Looking for):

A: Bad/dangerous behavior is fun—so much so that Katy can’t wait to repeat her actions next Friday night.

A: Obviously this song endorses stuff that isn’t pleasing to God. But we should remember that people who pursue this lifestyle are hurting inside—and they want it all to happen again next Friday night not so much because they’re in for a repeat of total pleasure…but because they’re in hot pursuit of pleasure that only God can give.

A: First we must ask God to guard our hearts and minds and lead us not into temptation. Second we must have compassion for those who pursue the lifestyle that Katy sings about in “Last Friday Night (T.G.I.F.).” They’re very likely in some kind of pain and actually need the freedom that only Christ can give.

Transitional Statement:
“Last Friday Night (T.G.I.F.)” is a catchy single that a whole lot of people love—but why is it so popular? Is it because of the music video? Is it because of the catchy melody? Or do a lot of listeners love Perry’s racy lyrics? The Bible definitely has a few things to say about the content of this song—as well as an infinitely better alternative.

It can be argued that the humor in the music video is a marketing tool—one that softens the impact of the song’s very decadent lyrics. Have you ever heard of the frog-in-the-kettle phenomenon? (That if you put a frog in a pot filled with room-temperature water and gradually turn up the heat, the frog won’t attempt to escape until it’s too late…) It’s the same strategy that once-controversial TV shows have used to gain widespread acceptance: Couch bad behavior in a humorous, non-threatening light, and the behavior gradually seems “normal” after repeated viewings. In fact, it’s called “normalization.”

means sex between three people. Definitely not an action God’s thrilled with!

13 Therefore, prepare your minds for action; be self-controlled; set your hope fully on the grace to be given you when Jesus Christ is revealed. 14 As obedient children, do not conform to the evil desires you had when you lived in ignorance. 15 But just as he who called you is holy, so be holy in all you do; 16 for it is written: “Be holy, because I am holy.”

Wrap Up
It shouldn’t surprise us that pop singers such as Katy Perry (and many others) have songs like this on the radio. Bad behavior and pop music go together like peanut butter and jelly—it’s always been that way, and it will always be that way.

But while we can’t stop these songs from being created, we can make choices about how we’ll respond to them as mature believers in Christ. Not that doing so is any easy task—it’s not! Today more than ever, it’s becoming harder to take a stand for Christ when so much of the world views Christians in a negative light. Fortunately, though, our job is to point out Jesus…not our own awesomeness.

Before we close in prayer, I want you all to close your eyes and think about people you know who are attracted to the things Katy Perry is singing about—people who would want to recreate the lyrical images in real life. Of course, we need only look at the news headlines to know that there are consequences to living in the manner Katy celebrates: You all probably heard about the famousJackass MTV show member, Ryan Dunn, who last week left a club with twice as much alcohol in his system than the law allows, crashed his car at more than 120 miles per hour, and died with his car engulfed in flames. Dunn’s passenger died, too.

Let’s pray that God will lead us not into such temptation—and that we’ll be messengers of hope to all those who could end up being the next Ryan Dunn, searching for the pleasure they can’t quite reach, no matter how many Friday nights they spend going for it.