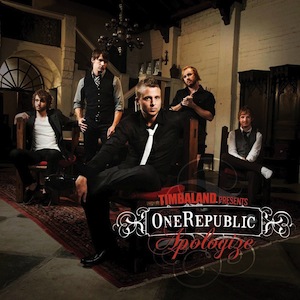 The Song: “Apologize” by Timbaland and One Republic

Main Point of Discussion: Christians do not have the freedom to withhold forgiveness. If we choose to not forgive, we lock ourselves into a prison of guilt and loneliness.

The Music Video:
The song’s video can be found at the following link: http://www.youtube.com/watch?v=nYspu7WTJW8

I’m holding on your rope,
Got me ten feet off the ground
I’m hearin’ what you say but I just can’t make a sound

I’d take another chance, take a fall
Take a shot for you
And I need you like a heart needs a beat
But it’s nothin new – yeah yeah
I loved you with a fire red-
Now it’s turning blue, and you say…
“Sorry” like the angel heaven let me think was you
But I’m afraid…

A: The singer wants to forgive his loved one, but in the end he believes it’s too late—far too much hurt has transpired, and the singer believes it’s wrong (and not possible) for him to extend forgiveness.

A: We should take note of how hard it is sometimes to extend forgiveness to others. Pride gets in the way. Wanting to “win” conflicts gets in the way. And not just for people who don’t believe in Jesus—it can be hard for Christians, too. So we need to reexamine the Scriptures and reinforce the commands that Christ has set down for us when it comes to offering forgiveness.

A: It can be tough! But God doesn’t promise ease. When Jesus tells Peter that he must be prepared to forgive wrongdoing 490 times, he doesn’t say “…but don’t worry, Pete—it’ll get easier each time you forgive!” If anything, it’ll get harder—especially if it’s the same person sinning against you in the same way. So, as in all things, we need God’s help each time that we’re tempted to hold back forgiveness—then we’re set free just as much as the person we’re forgiving is set free.

Transitional Statement:
This song has rocketed up the charts and racked up over 22 million plays on his MySpace page. Evidently a ton of folks are relating to the themes of this song, which mainly revolve around the idea that at some point, it is too late to apologize and make things right again.

“Lord, how often should I forgive someone who sins against me? Seven times?”

“No, not seven times,” Jesus replied, “but seventy times seven.”
Say something like…
It’s anybody’s guess as to what was going on in Peter’s life when he asked Jesus this question. Maybe he had a fight with his wife. Maybe one of his kids was rebelling. Or maybe someone cut him off in donkey traffic during rush hour? Either way, Peter was probably hoping that at least after seven times, he could get off the hook and write his own version of “Apologize.”

But Jesus gave a very different answer than Peter expected… “Not seven times, Peter, but 490 times!”

In other words, there are no limits on forgiveness.

Therefore, the Kingdom of Heaven can be compared to a king who decided to bring his accounts up to date with servants who had borrowed money from him. In the process, one of his debtors was brought in who owed him millions of dollars. He couldn’t pay, so his master ordered that he be sold—along with his wife, his children, and everything he owned—to pay the debt.

“But the man fell down before his master and begged him, ‘Please, be patient with me, and I will pay it all.’ Then his master was filled with pity for him, and he released him and forgave his debt.

“But when the man left the king, he went to a fellow servant who owed him a few thousand dollars. He grabbed him by the throat and demanded instant payment.

“His fellow servant fell down before him and begged for a little more time. ‘Be patient with me, and I will pay it,’ he pleaded. But his creditor wouldn’t wait. He had the man arrested and put in prison until the debt could be paid in full.

“When some of the other servants saw this, they were very upset. They went to the king and told him everything that had happened. Then the king called in the man he had forgiven and said, ‘You evil servant! I forgave you that tremendous debt because you pleaded with me. Shouldn’t you have mercy on your fellow servant, just as I had mercy on you?’ Then the angry king sent the man to prison to be tortured until he had paid his entire debt.

“That’s what my heavenly Father will do to you if you refuse to forgive your brothers and sisters from your heart.”

Wrap Up:
Are you feeling like you’re in an emotional prison lately? If so, it might be linked to the fact that you’ve entered into ‘Timbaland,’ and you refuse to forgive someone who hurt you because it’s ‘too late.’

Good news… the key to the prison door that holds you captive is in the chambers of your heart. It’s called forgiveness, all you need to do is take it out, and God will set you free. If you are having a hard time taking it out, ask Jesus to help you. Ask Him to give you the strength, because believe me, He has more than enough to share with you.

And when you look at it that way, it’s absolutely never too late!

Pass out paper and pens and ask your family members to prayerfully consider who might be on their ‘unforgiven’ lists. Ask them to write down any names, then ask God to give them the strength to forgive them. One helpful phrase they can repeat in their minds is something like- “because God forgives me, I forgive _________.” After some time has passed, ask them to tear up the paper, then you walk around and ask them to throw away the pieces to represent their forgiveness.