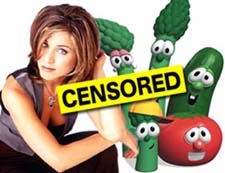 What do Veggie Tales and TV’s “Friends” have in common? Good question. Keep reading for a lesson on perception.

How do we perceive “the unchurched?” Or, more importantly, ever thought about how your unchurched neighbor perceives you? How about how they perceive Christians in general?

Recently, I was reading an article linked from Al Menconi’s ministry, written by Bruce Kluger of USA TODAY (posted December 21, 2003). The article takes some Christians by surprise because it gives us a glimpse into the mind of “the unchurched” and sheds light on how the “churched” and “unchurched” perceive each other.

I find it funny that many “churched people” think that all “the unchurched” are all partying, immoral atheists. Is this true? The Kluger article is a good example of a secular author who obviously is encouraging people to make good moral parenting decisions. In fact, the author is a regular contributor to “Parenting Magazine.” And his USA Today article is encouraging parents to talk to teens about casual sex, citing the hit show “Friends” as an example of a show to monitor. Bruce says, “As parents, we have good reason to fret about our kids’ beholding so much carefree hanky-panky across the dial.”

Sounds good. At first glance one might think that “Focus on Family” could have written the article.

But then Bruce’s article takes an interesting turn, giving us a glimpse of how “the unchurched” perceive Christians. In the middle of his article about the inappropriate sexual humor in Friends he talks about a “similar” experience he had with a Veggie Tales video. Bruce writes:

“For example, when VeggieTales, the popular children’s video series, was released, I glanced at the packaging – with its colorful cast of smiling, anthropomorphic cukes and tomatoes – and assumed the tape was about nutrition. I booted up a copy for my kids, but no sooner had the plot kicked in than one of the characters began invoking a passage from the Bible. Immediately removing the tape, I reread the packaging. Not one mention there of religion. In fact, it was only when I researched the series online that I discovered the production company’s Christian roots and its goal “to introduce families to God and the Bible” to “enhance the moral and spiritual fabric of our society.”

Don’t get me wrong – that’s a noble mission for believers. But in my house, religion is a very personal matter, and in this instance I felt more than a little resentful at having been led down the vegetable garden path only to wind up in the garden of Gethsemane.

Although animated fresh produce espousing God is a far cry from Jennifer Aniston bed-hopping her way through 10 seasons on the air, both scenarios present a fundamental and disturbing notion: Somewhere along the line, somebody else has decided what’s OK for our kids to watch. Now it’s up to us as parents to frame that information accordingly.”

I’ve worked with “unchurched” students for years. Every year I meet parents who don’t want their kids involved in anything to do with Jesus — especially someone who is sneaky about their approach.

Bottom line. I think you’ll find that there are a large group of very moral people, making pretty moral decisions … who just don’t think that God or the church has any answers for them. We’ll also find that a percentage of this group actually avoid the church because they don’t want religion shoved down their throat.

Luckily, not all of the “unchurched” are aggressive or resistant to Christian influence. As a matter of fact, many are not only searching for “something,” but are open to our invitations to church or discussions about God. But we need to be careful and “as innocent as doves” as we approach people. We don’t need to use back-door approaches or trickery. We just have this hope within us that we can’t help but share with others.

1 Thes. 2:3-4 (NIV)
For the appeal we make does not spring from error or impure motives, nor are we trying to trick you. [4] On the contrary, we speak as men approved by God to be entrusted with the gospel. We are not trying to please men but God, who tests our hearts.

For more on our “REACHING THE UNCHURCHED” training conference CLICK HERE!

Read Jonathan’s article on “Understanding and Reaching the Unchurched“