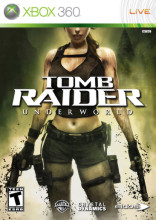 Tomb Raider Underworld is the sequel to the game Tomb Raider Legend with tie-ins to Tomb Raider Anniversary as well. Once again you play as Lara Croft, this time in search of the ancient relic Thor’s Hammer. Lara is looking for Thor’s Hammer in order the defeat the Queen of Atlantis and hopefully find out what happened to her mother who went missing at the beginning of Tomb Raider Legend.

The game is played like past Tomb Raider games from a third person perspective. Most of the game is about exploring tombs and solving puzzles to help you get from point A to point B, but there is some combat as well in the form of gunplay against animals and other human characters.

Tomb Raider Underworld is played from a third person perspective. Lara is able to use physical combat, but most often will use guns. There are different types of guns for Lara to use such as her two hand guns that she is most known for, but she can also sport other artillery such as a shotgun, harpoon gun and even a tranquilizer gun for those players who would rather put enemies to sleep instead of kill.

Swear words were only used a small number of times. I counted hell and damn each twice and “god” once.

Lara’s outfits have always been a little sensual and Underworld is no different. Lara usually wears outfits that reveal some cleavage and/or midriff.

There is some reference to Mythological characters such as Odin and Thor. At one point in the game Lara states that “she needs Thor’s Hammer to kill a god” in reference to the need to defeat the Queen of Atlantis. In addition there is a stone statue of the god “Shiva” in one level. Also, there are some skeleton like creatures called thralls that Lara has to fight against.

Much of Lara’s motivation for getting Thor’s Hammer is for revenge (although it is revenge against the bad guys.)

I really enjoyed Tomb Raider Legend and Anniversary so I came into Underworld with some high expectations. I have to say I felt a little let down. It was not that Underworld was a bad game; I just did not feel it was as a good as it could have been. With that said, I would only recommend Tomb Raider Underworld to people who are already fans of the franchise and to those people I would suggest either renting the game or waiting till it drops in price.