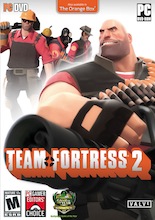 Team Fortress 2 has become something of a phenomenon in the video game world. Though its audience is generally limited to PC gamers, its visual style is recognized by many, and its system of character roles and varied weapons has marked it as a very unique multiplayer experience.

Team Fortress 2 is the sequel to a Half-Life mod, and attempts to mix of the traditional system of multiplayer shooters by adding in classes and a huge variety of weapons with different behaviors. For instance, a Doctor goes around healing his teammates so they can fight longer and harder, but has little combat prowess. The Heavy uses a large machine gun to provide brute force on the battlefield. The Spy sneaks around, and can take on the guise of an enemy teammate in order to infiltrate their ranks and take them down from the inside. There is a surprising amount of strategy inherent in these mechanics, and it’s helped make the game as popular as it is.

The other element that has led to the game’s popularity is its art style and humor. A series of “Meet the Team” videos introduces each of the character classes in a humorous manner, characters make funny quips as they play, and the cartoony, colorful, absurdly violent look of the game fits the crazy fun it offers. This humorous style has even led to a large subgenre of Youtube videos centered around characters and dialogue from the game.

But enough about why it’s popular. Should you, or your child, be playing Team Fortress 2?

Team Fortress 2 is very violent, but it’s hard to call the violence offensive due to the cartoony visual style of the game. The game revolves around using various weapons, from guns to explosives to baseball bats, to kill members of the other team.

The graphic nature of the violence ranges from simple blood splatters to people blowing into bloody pieces from explosives. But as graphic as this sounds, it doesn’t actually come across this way because of how cartoony the art style is. Despite being far more violent than classic slapstick like Looney Tunes, it’s not really any more disturbing because of how silly and ridiculous it is.

That said, there is actually a way to turn off blood and gore in the game’s settings, so if this is a concern for you, it can be avoided.

There is no language in the game itself, though since it’s an online shooter, there may be language used by other players that the game cannot predict or prevent.

There is no sexual content to speak of in Team Fortress 2.

There are some sci-fi elements, but no spiritual ones.

Again, user-generated content in the game is hard for the game to control. Players can speak however they want, and there are “sprays,” images that people can upload and post in the game. The only way to control these things is to turn them off completely, which is an option, but turning off chat can actually affect the enjoyment of the game since it makes team communication impossible.

The only child I know who I could have play this is nine years old, so I did not have him do it. I’ve heard that children can enjoy the game, though of course it is not as popular with younger age groups because it doesn’t look as realistic as Call of Duty (a terrible reason to prefer one game over another, but a common one among kids nonetheless).

Reviewers Thoughts:
Team Fortress 2 is a fun game, and for better or for worse, it’s one that’s best experienced by putting a lot of time into it. There are hundreds of weapons that have different strengths, weaknesses, and special effects, which means that a dedicated player will find a lot of enjoyment in playing for a long time and trying to collect the best ones for their chosen classes. The colorful and humorous style of the game makes it a joy to watch and hear as you play, and the class-based system makes teamwork very important. All in all, it is a very well-made and enjoyable multiplayer shooter, and it’s completely free, making it a great choice for someone who wants to enjoy a video game with their friends. That said, it’s not the ideal game for someone who just wants to spend a few minutes every now and again; its expansive items and class system reward time, and if there’s not much time spent on it, it’s still fun, but not as rewarding.

That said, that person shouldn’t be too young. The violence isn’t too much of a concern; it’s more graphic than most cartoon slaptstick, but not really any more offensive due to its cartoony nature. It’s just silly rather then being graphic or disturbing. But playing with real people over the internet simply requires enough maturity to understand and deal with the fact that people can sometimes be annoying or terrible, and though it’s not a dreadful community of people, it’s not without its bad apples. If your child is mature enough to handle the stuff classmates and internet communities tend to throw at them, there shouldn’t be a problem with this game.

And if not, there’s always the option to turn off the blood and social elements of the game.