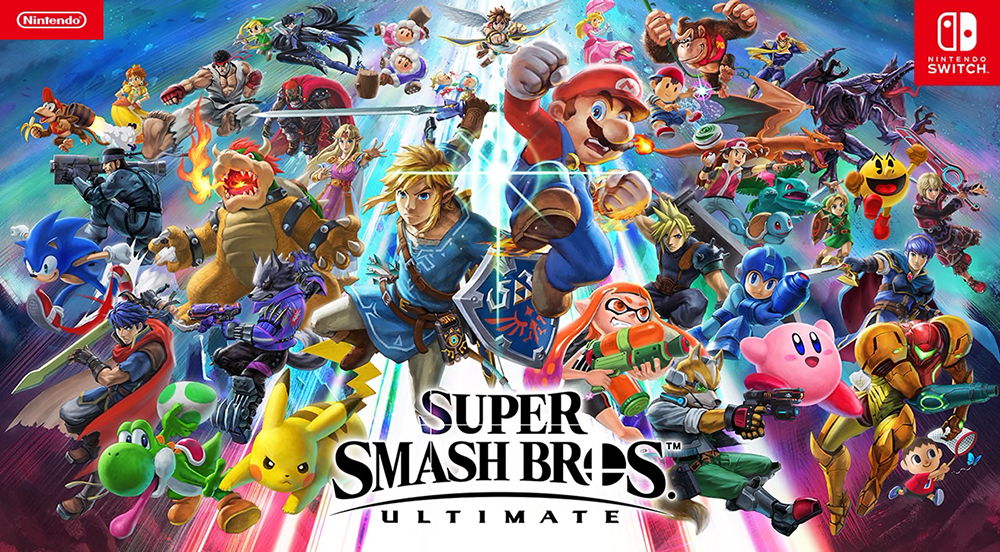 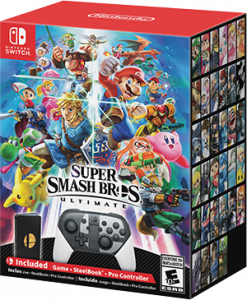 Game Description:
The time has come once again for a huge collection of characters from across Nintendo’s long-running, diverse library of games to come together in the name of friendly competition: the new Smash Bros. is finally here!

For those unfamiliar, Super Smash Bros. originally released on the Nintendo 64 with a small selection of beloved characters from various Nintendo games and some unique twists on the formula for 2D fighting games. Subsequent releases added complexities to the game systems, a variety of game modes, and a significant amount of extra characters, and the series has essentially become a celebration of Nintendo’s legacy and all their beloved characters, worlds, and music.

Ultimate includes every single character from previous Smash Bros. games–a total of 75 playable characters–who players will use to fight with a variety of movesets unique to each individual character. The idea is to hit the other player(s) to cause their damage meter to rise; the higher damage a character has taken, the further they fly when hit with a strong attack. Rather than losing once their health hits zero, the idea is to make them fly or fall off the screen. Add the game’s various items, stages, rulsets, and game modes, and you have a series that’s been a consistent presence at gaming parties and a major hit in professional esports for the better part of two decades.

Of course, that doesn’t automatically mean the game is appropriate for your child to play. Let’s take a look and see where the game lands on that scale.

Violence:
As a fighting game, Smash Bros. Ultimate is based entirely around the infliction of violence. The characters vary wildly in their looks and styles; some use swords and bows, others use fire and magical explosions, others use guns and grenades, and some use more fantastical means of attack, ranging from giant paint rollers to small, plant-like creatures.

Despite the wide variety of character designs, the violence of Super Smash Bros. Ultimate is very colorful, cartoony, and not at all graphic. When a character is hit, they often flinch, or fly backward from the force of the blow, but there is never any blood or graphic violence of any kind.

Sexual Content:
Some characters, such as Zero Suit Samus and Solid Snake, wear skintight or revealing clothing. The only particularly noteworthy character in this regard is Bayonetta, whose hair forms her clothing and will sometimes reveal more skin as she uses it in her attacks (though this effect is not nearly as revealing as in the actual Bayonetta games).

It’s worth noting that more characters are set to be introduced over time via paid, downloadable expansions; in the highly unlikely event that these characters present a noteworthy addition of sexual content, this review will be updated.

Spirituality:
Many of the characters in the game come from fantasy series that include magical elements. These are all rather understated, such as using sparkly magical attacks, shooting fire at enemies, or summoning monsters out of portals. None of them are discussed or expanded upon in any way since those explanations come from each character’s respective games.

Positive Elements:
Ultimate includes a very limited story mode, which provides hours of gameplay but very little actual narrative content. However, central to this story is the idea of awakening life from disaster and uniting to bring about a better future, as largely expressed in the game’s theme song, Lifelight (which I will never stop listening to).

Aside from the content of the game itself, I can attest from personal experience that Super Smash Bros. is an excellent catalyst for social events and bonding with friends and family. In the same way that one might bond over a board game night, this series has long acted as a cooperative and competitive activity for my friends and I, and it’s an excellent way to get everyone together on the same couch and do something fun with them.

A Child’s Perspective:
As a child, I sunk more hours into Super Smash Bros. Melee than almost any other game to this day. Many other children I know still love the series. Kids enjoy Smash Bros. immensely.

Reviewers Thoughts:
As a longtime Smash Bros. fan, I was very excited for the release of Ultimate, and it has not disappointed me. It’s got just about everything I love about it–the excellent multiplayer modes, the expansive collection of characters and songs from games that mean a lot to me, and a great variety of unique characters that are a blast to play and a challenge to master. While I am slightly disappointed by the lack of a proper story mode like we had on the Wii version, but the star of Smash Bros. has always been the multiplayer, so it’s a relatively minor gripe.

When it comes down to it, Smash Bros. has always been a must-have for any Nintendo owners who want toenjoy games with the other people in their life, whether that’s parents and children, boyfriends and girlfriends, or a bunch of friends from school coming over for a birthday party. My wife and I have been playing it often since release, and I’ve even used the online mode to connect with friends I haven’t seen since I moved across the country a year ago.

And predictably, there’s not much here of concern to your child. Smash Bros. is, as always, a colorful, light-hearted competitive experience played with the rose-tinted glasses of Nintendo’s nostalgic legacy, and I can think of few things as perfectly suited to a fun, family-friendly time.