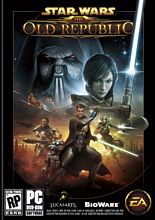 Unless you’ve lived in a cave for the past 35 years, you’re probably familiar with Star Wars. The movie franchise has impacted many areas of our society, and is generally a household name. One of the things the Star Wars universe is known for is outstanding video games. Star Wars: The Old Republic (SWTOR) is the latest game to provide an immersive experience in the Star Wars universe. The game is credited as the fastest growing MMO in history so far, gaining over a million subscribers within a month of launch. The game costs $15 a month to play in addition to the initial purchase price of the game.

SWTOR is set several thousand years before the Star Wars movies take place. The Galactic Republic and Sith Empire fought against one another, resulting in the Republic defeating the Empire. The Sith were believed to have been eliminated, and for a few centuries, the Republic was the primary power in the galaxy. Then the Sith Empire returned, retook their primary worlds, and even sacked the Republic’s capital world of Coruscant. A cease-fire treaty was signed between the two powers. The game is set a few years after this treaty, when tensions between the Empire and the Republic have peaked again. You play the role of a character sided with one of the two major factions. If you favor the Republic, you can play a Jedi Knight, Jedi Consular, Republic Trooper or a Smuggler. If the Empire is your faction of choice, you can play a Sith Warrior, Sith Inquisitor, Imperial Agent, or Bounty Hunter.

Most of the actual gameplay is very similar to other MMO’s (massively multiplayer online games) out there (World of Warcraft, for example). Your character has a variety of skills based on what class and specializations you select. As you encounter enemies, you use these skills to cause damage to or otherwise hinder foes, and to heal and protect yourself and allies. As you play through the story, several companion characters will join your team. These characters help you fight and can also help you sell off surplus items in the field. SWTOR also features a variety of PvP (player vs. player) venues, item crafting, and other MMO staples.

Where SWTOR stands out among MMO’s is in the hours of recorded dialogue and excellent storytelling BioWare is known for. Most quests in the game begin with a cutscene involving dialogue with the character giving the quest. As you talk to the other character, you are given options of how to respond. Your choices will affect many things, such as your companion characters’ affection for you, your alignment to the light or dark side of the Force, and the difficulty of battles you are about to face. Sometimes, your decisions will have an impact later in the game when you least expect it. Any one conversation could have several outcomes. Each of the game’s eight major classes have an entire storyline full of dialogue and cutscenes that you could play through in different ways several times. After putting in more hours than I’d care to admit playing the game since December, there are many hours of dialogue and story I haven’t even touched.

Most of the gameplay revolves around slicing and blasting your enemies. Jedi and Sith characters use lightsabers and various Force powers (such as lightning, telekinetic rock throwing, and choking) to best their opponents. Other characters use various blasters, melee weapons, explosives, and other kinds of technology as they fight. Bodies of defeated foes stick around long enough for you to collect loot and then disappear.

Though there is not bloodshed or gore when your character engages in combat, there are instances of blood in the game. The most extreme example is a ritual involved in a quest some Sith characters will undertake. In this ritual, a skull is collected and must be dipped in a pool of blood. This quest was not a requirement to progress the story for the character. Another quest I completed involved bringing the head of a defeated enemy to the quest-giver. When I defeated the enemy, the head was treated as an item you collect, which you do not witness being cut off or displayed. I am told there is a quest where a severed head is displayed as a warning to others.

Occasionally, the choices you make in dialogue can result in either further violence or prevention of violence. For example, you can choose to destroy your fallen opponent, or have mercy on them. You can allow something bad to happen to prisoners that have rebelled against your faction, or you can spare them and be merciful. A negotiation can lead to a fight or to a peaceful solution.

The words damn and hell make some appearances in dialogue. Since the game is an MMO, expect that chat will contain the occasional obscenities. The in-game chat does provide a level of censoring for chat channels if enabled.

Many of the cantinas in game feature scantily-clad female dancers as well as holographic pole dancers. Other female outfits expose plenty of skin. As you dialogue with NPC’s (non-player characters) in-game, you will occasionally be given the option to flirt. In some cases, this can lead to your character entering a romance with that character. This is especially true with your companion characters. These conversations can be laced with innuendo. In the event your character becomes intimate with the other character, the two are seen walking off screen, the screen fades and then the characters walk back onscreen and talk about their experience. Currently, relationships are confined to male-female couples, but the developer has discussed introducing same-gender relationships in a future update.

The obvious spiritual staple of the Star Wars universe is the dualistic Force. The Force manifests itself in a light side, generally favored by Jedi and the Republic, and a dark side, the Sith Empire’s main flavor. Players alignment with the Force is determined by their choices in dialogue and in quests. It is entirely possible to play as a dark-sided Jedi or a light-sided Sith. Following either side of the Force can involve a variety of rituals that are completed by your character. Jedi are known to spend a lot of time in meditation. Some individuals perform rituals to foresee the future. Other alien races have a wide variety of religious beliefs and rituals. For example, Trandoshans believe that a great scorekeeper gives points for their hunting exploits.

For a newly launched MMO title, Star Wars: The Old Republic has an amazing amount of content. The game is full of beautiful visuals and plenty of fantastic story telling. The gameplay can be a bit repetitive, although the game developers have promised a lot of high quality updates to keep things fresh. I was a bit surprised at some of the game’s content, particularly the sexual content and some of the darker spiritual elements. Parents should consider these elements when they determine this game’s suitability for their teens. If your teen is playing this game, the decisions they must make in conversations could be the object of some great discussions on morality and the consequences of actions.