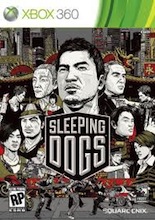 Sleeping Dogs is much like watching old John Woo films and is definitely influenced by Asian action films in general. The story involves undercover cop, Wei Shen, who infiltrates the Hong Kong triads. Much like Grand Theft Auto before it, you are tasked with taking on odd jobs that lead to bigger and more complex missions in this open world game. Played from the third-person there are plenty of car chases, shootouts, and some truly epic fighting this side of Batman Arkham City to engage in. The hand-to-hand combat is indeed the best part of the game as you can literally fight over 10 enemies at once. The combos are really great and you often use the environment to help you out. The finishing moves can be a bit excessive at times though and make you cringe.

The story is actually very well written and does a great job of keeping the player invested to see what happens next. The dialogue is also well spoken and the voice actors deliver solid performances all around. The graphics also do a great job of showcasing the neon world of Tokyo.

This game is very violent. You can punch, kick, shoot, and use the environment to perform kills which result in a lot of blood. You can impale enemies with drills and even shove their heads into spinning fans.

Features language such as sh*t, f**k, c*nt, and motherf***r and is quite pervasive.

Although, there is no nudity in this game it does feature tons of sexual references including sex with underage girls, rape, torture, and you can visit massage parlors that offer more than just backrubs.

Although the player cannot engage in drug or tobacco use, the game does show characters using drugs, and alcohol.

Although, I am a huge fan of the first game and I like this game just as much, I would use caution because of the mature content in deciding if it is right for your family.