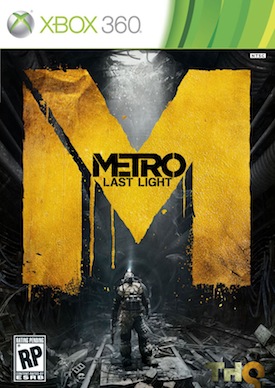 Metro 2033 is one of the few video games to be based on a novel, and it was genuinely good in many ways. Gorgeous visuals and an engrossing atmosphere backed up a choice system so subtle the player never even actively realizes their actions will affect the outcome of the story. Metro: Last Light is the long-awaited sequel to that sleeper hit, and it aims to refine the systems of the original while delivering an original story (read: not based on the sequel book, Metro 2034).

The result is a very similar game to its predecessor in some ways, but with some key differences that have gained it general acclaim, but could be a bit divisive. The story is about humanity trying to survive in the Metro systems of Moscow after a nuclear war destroyed everyone on the surface, soaking the atmosphere in radiation and mutating animals into fearsome beasts. This sequel focuses on the Dark Ones, an advanced race of humans mutated into beings with unique powers and the ability to communicate directly with the human mind. Last Light assumes the bad ending of the first game, where the protagonist, Artyom, destroys the Dark Ones instead of embracing them in a peaceful manner, and tasks the player with tracking down a single surviving child of the Dark Ones.

Of course, this setup is a rather mature one, as is everything else about the game. The Metro series is not intended for children for a number of reasons, all of which will be discussed in detail below.

Violence:
Though Metro: Last Light refrains from the level of gore many M-rated shooters go for, there is plenty of fairly graphic violence. Shooting someone is followed by the typical spray of blood, and some characters are executed onscreen with a bullet to the head. The player can sneak up behind an enemy soldier and kill them by slitting their throat or jabbing their knife into the enemy’s neck.

Language:
The f-word, the s-word, and all manner of lesser swear words are said regularly.

Sexual Content:
The player enters a club at one point, populated by women dancing with little clothing on. Later in this area, a topless woman dancing for a client can be seen through a cracked door. Soon afterward, a woman with a near-transparent top offers the player to pay her for a dance, at which point she takes off what little top she had and dances sensually for the player. Later on, a female character invites Artyom to bed, and Artyom puts his hand on her exposed breast before the scene cuts to black.

Spirituality:
The Dark Ones seem to have some sort of powers, but it is a matter of mutation and mind powers rather than spiritual power.

Misc:
The player is given plenty of opportunities to prove themselves a moral person for the sake of the good ending, which of course also comes with opportunity to be immoral. It encourages players to progress through the game without killing, if possible, and even presents other opportunities to be an upright person (the aforementioned stripper scene has a negative effect on the possibility of a best outcome, for instance).

In a few scenes, the player’s character drinks alcohol (sometimes this is optional, sometimes required), resulting in a blurry and unstable effect.

A Child’s Perspective:
This game is not intended to be appropriate for a child, so I did not ask one to play it.

Reviewers Thoughts:
Metro: Last Light is a serviceable sequel to the original in many ways, but it did not leave me with as strong an impression as the first one. The most ubiquitous reason is the relative lack of the Dark Ones and their effects for the first three-fourths of the game; they added a mysterious, almost supernatural feel to the game that was largely absent from this one until the last while.

However, I was also disappointed with the sexual content in this one. The only overt sexual content in the first game was a prostitute who would invite you to follow her, but knock you out and steal your money if you did (thus also lowering the possibility of gaining the good ending); this is a subtle and non-graphic way to introduce questions of sexual morality. This one included a lap dance scene complete with nudity and a rumbling controller, then some nudity and sexual implications that meant nothing for the characters involved. These things just didn’t belong here for any reason other than the M-rating, and that was disappointing.

If you liked the first Metro game and want more, I can’t say you will regret playing this. However, I also cannot claim it’s as good a game as its predecessor, and I definitely cannot claim you should allow your child to play this game without some serious consideration as to their moral strength and maturity.