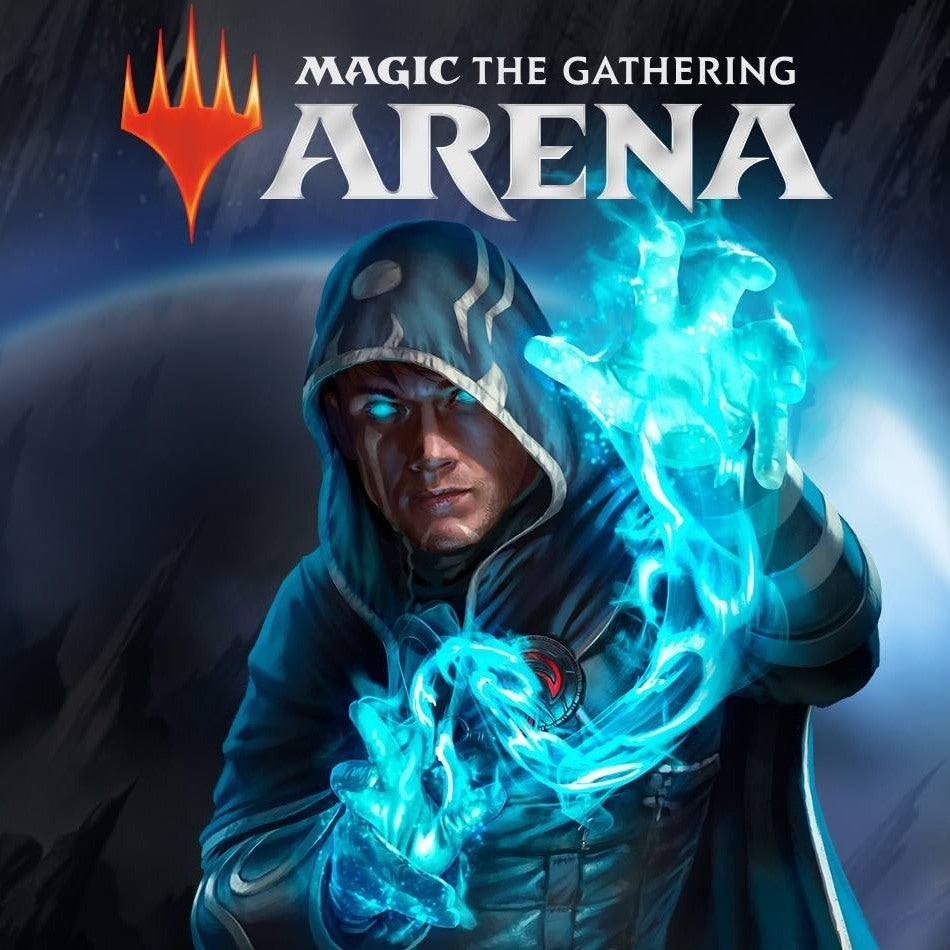 Game Description:
Before Hearthstone, before Yu-Gi-Oh, before collectable card games as we know them today, there was a graduate student with an idea: Richard Garfield. His ideas eventually resulted in the first collectable card game: Magic: The Gathering, which launched in 1993. Since then, it’s become the biggest card game in the world, and has spawned many imitators in its wake.

And now, MTG is branching out into the digital world.  Not for the first time, of course—Magic Online has been around for many years.  But they’re giving it another try with Magic: The Gathering Arena, a take that appears to be more streamlined and less application-y (when I tried Magic Online, it reminded me of an Excel worksheet or a ‘90s-2000s program—Arena feels more like a video game to me than Online).

Arena has been in beta for a long time, but now it’s open to the public.  Perhaps your kids play Magic, or are interesting in learning.  Or maybe your family has never heard of it. Whatever the case, let’s give Arena a review.

Violence:
The goal of a typical Magic game is this: you and your opponent have 20 Life (more depending on the format being played).  Use your cards and your wits to reduce your opponent’s life to 0, before they do the same to you.

This can be accomplished in a variety of ways, but the most common is having creatures attack your opponent.  Since this is a card game, this is represented by the creature card hitting an opponent (or their creature, if they chose to block the attack), and the creature hits harder depending on how strong it is.  You use non-creature cards to improve your other creatures, stop your opponent’s cards, and overall to help you win.  In Arena, you can play for fun, or try and climb the ranks and be the best of the best.

Magic’s lore and setting is, in general, a high fantasy one, where dragons and magic abound.  But there are also many different worlds in Magic’s lore—called “planes” with various other settings.  I’m saying this to tell you that the story takes itself quite seriously, but the game isn’t too violent.  I’m actually baffled by the ESRB’s description of the game of having “blood and gore”—I’ve played this game for quite a bit, and haven’t seen anything like that.  Its violence is mild and cartoony, fitting with the fantasy atmosphere.  And after all, this is a game about fighting each other with cards—it never gets overly detailed.

Spirituality:
Demons and angels make appearances on the cards, both as creatures and as artwork.  There are also various gods, most of them nature-themed.

Miscellaneous:
There are a few options that help disabled players in this game.  I really appreciated the option to right-click on cards to get a better view of the text, and the ability to customize all of the keyboard controls.  More options would be excellent though—for example, a narrator that could read the cards when they’re clicked on would be great for visually impaired players.  And an option to increase the text size would be nice—I found myself squinting at my computer screen a bit.

Parents should also note the microtransactions in this game.  Players earn “Gold” by playing/winning games, by completing daily challenges, and by doing well at events.  But there’s a premium currency called “Gems” that, most of the time, must be bought in the online store for real money.

Magic is known as a game where one must have money to keep up with play, and this version is no exception. Though I do give Arena credit that it’s easier to obtain cards without spending money—the game gives you a bunch of decks from the start, and you can get single packs of cards for Gold currency—it’s not perfect, and the game does seem designed to get players to spend real money.  Getting more than one pack of cards, for example, costs Gems instead of Gold, and items that cost Gems are usually always on the front page of the in-game store. Parents should be aware of the real-world money rooted in this game, and that Arena is doing everything it can to get players to spend.  It’s not as predatory as other products with in-game purchases, thankfully, and this is something that partially carries over from the “real-world” card game, but it’s still a factor.

I’ve written about microtransactions here if you want some more tips.

Positive Elements:
I’ve only been playing Magic for a few months—since around September, actually—and it’s quickly become one of my favorite games.  The reason why I, and many other people, enjoy it is because it engages both the left side of the brain (creativity, fun) and the right side (logic, reasoning) simultaneously.  This makes it super engaging, and with so many cards and ways to play (this game has been around for over 25 years, after all), it’s easy to get sucked in.  Putting together a 60-card deck, assembling the pieces together to create something amazing, is incredibly fun, and immediately rewarding with online options like Arena.

A Child’s Perspective:
If your kid likes fantasy stories, and/or thinking logically through puzzles, I’m sure they’ll appreciate Arena. Especially if they’ve played other collectable card games, like Hearthstone.

Reviewers Thoughts:
I’ve been having a lot of fun with Arena so far.  As a digital version of my favorite card game, it plays very well, and feels very modern.  There are parts about how Magic plays that I was worried wouldn’t be replicated—but my worries were for nothing.  This game plays extremely well, and is a great way to introduce people to Magic: The Gathering, or give experienced players a new avenue to enjoy this game.

However, it carries a large flaw that I’m starting to realize is part of Magic itself: the best, most powerful decks are the ones every person plays, and I barely see people experiment with the form.  This is a game to win, after all—and if you want to win, the best way is to play the deck that is known to be the strongest. I can usually tell what deck I’m going to be facing by the first or second turn—it’s disappointing to see a game marketed on experimentation and variety, with only a few decks being played the most.

That doesn’t mean there’s no experimenting players out there, of course.  And the game itself is fun—if it wasn’t, I wouldn’t be playing it.  But if you’re going to dive into Arena, be warned you’re going to see the same strategies a lot.

Overall, Magic: The Gathering Arena is a fresh take on the originator of collectable card games.  It plays well and feels fresh, and I’m definitely a fan, despite its flaws.