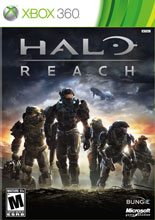 Halo Reach is the fifth FPS game in the Halo franchise and the first in the series that is a prequel. The game begins with an introduction into the world of Reach. You play as a Spartan named “Noble Six”, the most recent addition to Noble Team. The developers have actively left the main character ambiguous so that the player can fully immerse themselves in the experience of the game. And from there, the action begins as Noble Team drops into what they believe is a rebel attack, which instead turns out to be their worst fears realized: The Covenant, the genocidal race of aliens with a religious fervor, have come to planet Reach.

Halo Reach fits into Bungie’s tried and true formula for FPS’s. The player, usually accompanied by other members of Noble Team, moves across an area, killing all enemies in his/her path. What is unique to Halo: Reach compared to past Halo games is how expansive the game areas are. Rather than being closed and confined, the landscapes of Reach are massive and epic. The player moves in a linear path, but the developers have fleshed out the scenery so much that it is worthwhile to simply stop and look around. The colors are vibrant and landscapes so detailed, planet Reach feels very much alive.

Along with an engrossing single player campaign, the developers of Bungie have refined their formula for multiplayer and brought it to a new level all together. The traditional matchmaking options are present; allowing players to be placed into matches based on rankings and preferred online experiences. There is also a mode called Firefight, which allows players to team up and fight waves of enemies of increasing difficulty. And last, my favorite part of multiplayer, players can proceed through the story campaign co-operatively online as well.

Another feature that was included with Halo 3 that I feel has been perfected in Reach is Forge, which is Halo’s map editing feature. I have played around with this feature and am very excited for its potential. In Forge, players can utilize a full tool set for designing unique playgrounds for multiplayer experiences.

Halo Reach is a first-person shooter, and most all of the violence fits into this mode. The player takes command of many weapons and vehicles to kill the enemy aliens in his/her way. As enemies are killed, blood will issue forth and screams of pain will sound. If enemies are killed near walls or objects, blood will splatter onto the surface.

There are also some battles where the player will assume control of a starfighter type vehicle. In these levels, the player will see the action from a third person point of view.

Something that is new in Halo: Reach is cut-scene-esque takedowns. If a player is able to sneak up directly behind an enemy, the game will pull back into a third-person perspective while the player watches his/her character pull out a knife and perform a behind-the-back stabbing.

And finally, portions of the games regular cut-scenes show depictions of violence perpetrated by either your fellow teammates or the alien invaders. These cut-scenes include close quarters combat, distantly viewed destruction of starships, and aliens impaling humans on swords.

There is limited language used by the main characters of the story. However, there is significant language used by supporting soldiers that will accompany you on missions. Instances of damn, hell, ba**ard, and SOB are used multiple times during various missions throughout the game.

Also, as it is with most multiplayer games on Xbox Live, there is no real way to control the language of other players online. The developers have incorporated online preferences which allow players to choose whether they want to play with chatty players or quiet players, but this does not guarantee that players will abide by these preferences.

As a fan of the Halo series, I felt that this was the best of the entire series. The music in Halo: Reach is the most epic of the series, and yet it definitely has a sad tone which alludes to the final ending of the game and figuratively to the end of Bungie’s decade worth of work in the Halo universe. The multiplayer experience is one of the best on the market, and Bungie’s dedication to their work will ensure that this game continues its reign for some time. Personally, I plan to be playing this game for a while. Whether it is a good fit for your family or not, however, is up to you the parents to decide based on the information provided.