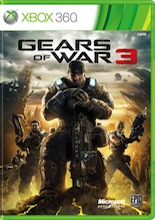 Gears of War 3 is the final episode in a trilogy that has defined an entire genre of video games. The first Gears of War, when it released in 2006, refined and popularized the idea of cover-based shooting, a concept that had only previously been used once (in Kill.Switch on the PS2). This is a gameplay concept in which the player presses a button to take cover behind something, and while in cover the game’s controls center around cover-based actions (aiming over cover, blindfiring over cover, walking along the cover, etc.). Now, pretty much all third-person shooters use this method.

This is humanity’s final stand. The Locust, the strange beings that erupted from the ground of the planet Sera all those years ago, have pushed humanity to its limits. But now, after the humans have destroyed their own final stronghold to deal a decisive blow to the Locust horde, both factions are being brought to their knees by a new threat: the Lambent. These creatures are infected Locust that seem to be overtaking the entire planet, and it has brought both human and Locust alike to the brink of extinction. But after receiving a message from Adam Fenix, the presumed-dead father of the protagonist, Marcus Fenix, there may yet be one hope for humanity. But survival has always come at a great cost in this war, and there’s no telling how many more will give their lives in this last-ditch attempt to prevent the extinction of the entire human race.

This last entry in the Gears of War trilogy is definitively the last chapter in this story, and aims to be bigger and more epic than either of its predecessors. However, being the dark and gritty war story that it is, that also means there is plenty for parents to be concerned about (thus, the M rating). So what should you be looking out for in this, humanity’s final stand?

Gears of War has always emphasized violence. These games are brutal and graphic, and the third installment is no exception.

Gears of War 3 is played from a third-person perspective. The gameplay is centered around the aforementioned cover-based gameplay mechanic; the player takes cover behind whatever is on the battlefield and fires at various enemies from it with a variety of weapons. Blood splatters when a character or enemy is shot, but that is the mild stuff. This game has an assault rifle with a chainsaw bayonet; when someone revs it up next to an enemy, they rip right through them, blood splattering all over and the one being chainsawed splitting into two pieces. When someone is blown up by a grenade, they fly into multiple pieces. When someone is killed with a shotgun at point blank range, there is no getting out of there in one piece.

Most brutal, however, are the executions offered in the game. When a character (friend or foe) takes too much damage, they will go down, left helpless but to crawl to safety unless an ally revives them. At this point, it’s up to the downed player’s enemies to kill him before that can happen. This can be done simply by kicking them, but that wasn’t enough for Epic Games, who included over 20 unique finishing moves depending on the weapon used. This ranges from relatively mild (swinging the sniper rifle like an axe and bringing it down on the player) to rather gory (ripping off an enemy’s arm and beating them to death with it) to pretty disturbingly graphic (sticking the flamethrower in their gut and firing so their insides are roasted and fire jets out of their mouth). These executions are the most graphic Gears has to offer.

It should be noted, however, that there is an option to turn off the blood and gore; these executions will still happen, but there will be no blood or dismemberment in them or any other part of the game if this option is selected.

It should be noted that there is an option to turn off the offensive language.

All characters spend almost the entire time in battle armor; there’s nary a nude character or even revealing outfit in sight.

When the player visits a Stranded outpost (people who see the government and military as oppressive and make their way in this ruined world rather than fighting back), once or twice a character will offer to trade supplies for one of the female characters. This is refused or even completely ignored each time.

There is a new game mode in Gears of War 3 called Beast mode, in which the player is put on one of the multiplayer maps and spends limited resources on Locust beasts in an attempt to destroy the human outpost placed there. This is purely a multiplayer mode, and does not reflect any sort of support or even story relevance for the player’s role as the Locust.

I went into this hoping for two things: a satisfying end to the trilogy’s desperate tale, and a vastly improved multiplayer that fixed the many pervasive issues of Gears of War 2. The result is a bit of a mixed bag.

The story was great. Yes, it still falls prey to many of the clichés the series is known for (namely being a game about burly manly men brutally killing burly manly creatures with their burly man-muscles), but this one continues in the tradition of the second one by trying to pull at our heartstrings a bit more, and certainly succeeds. It does a far better job than the previous games at truly making the atmosphere desperate and hopeless, and develops the characters far deeper, even breaking the most resolved of the men who, based on their trope, simply don’t cry. It also has one exceptionally emotional scene with possibly the best use of music in a video game I’ve seen in a while. It’s not perfect by any means (new characters are brought in but underdeveloped, for instance), but it wraps up the story and all its loose ends, so we can confidently say this story is complete, and satisfyingly so.

The multiplayer is certainly improved over that of the second. Gears of War 2 was an infamously buggy, laggy mess with countless balance issues and tons of glitches less-honorable players loved to use to their advantage. Gears of War 3 takes the balance issues but leaves the glitches, creating a smoother and more enjoyable experience, but still offering those annoying moments when a player uses a woefully overpowered weapon to kill you unfairly. Horde mode (where you play as humans on a multiplayer map and defend from increasingly difficult hordes of enemies) has been improved and expanded, and is far more enjoyable for it. Beast mode is also entertaining, offering use of some of the most iconic beastly enemies in the franchise. And through all these modes, a variety of ribbons, medals, and achievements give the player reason to keep coming back long after they’ve finished the game’s story.

So yes, Gears of War 3 is a very well-designed and enjoyable game, but it’s also one that is best enjoyed by a mature adult. The language and violence are rather intense, and certainly not intended for younger audiences. Just like with movies and books, some video games simply aren’t made for children, and this is one of those. Use your judgment, but I would recommend keeping this one out of reach until your children are mature enough to handle it.