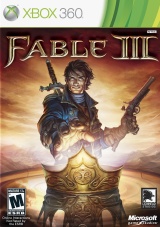 The kingdom of Albion is not what it used to be. Ruled by the tyrant King Logan, son of the Hero that had saved the kingdom only one generation before, the newly industrialized kingdom is on the brink of civil war. The player enters into this conflict as the younger brother or sister of King Logan. When Logan, in an act of exceptional depravity, displays just how far he has slipped, it becomes clear that a revolution is necessary. However, such an act is not possible without many allies; in order to successfully rebel and take the throne of Albion, the player must gain the trust of many groups across Albion. By organizing the people of Albion, the player will lead a revolution to overthrow a tyrant and become the king or queen; but how they rule the kingdom once that happens is entirely up to them.

FABLE III plays out in third person, meaning that the player sees the action as if watching from a floating camera, the angle of which they can control. The gameplay is a mix of combat (fighting against people and monsters alike), role-playing (making choices that will define the fate of the kingdom and the moral standing of the player’s character), and various other quests (finding items for people, capturing criminals, etc.).

Like its predecessors, FABLE III has a very fun look and feel to it; in fact, arguably the most enjoyable parts of it are some of the hilarious sidequests. But despite its somewhat cartoony look and fun feel, FABLE III is not a game designed for children.

When fighting in FABLE III, the player will be using a combination of sword, gun, and magic-based combat to battle wild beasts, malevolent creatures, and ill-meaning mercenaries. When someone is hit with a sword or gunshot, some blood flies from their bodies and stains the floor. As the player gets better with a sword or a gun, more stylish ways of killing their enemies will be unlocked. When killed with a high-level electricity spell, all that is left is a skeleton. The combat is fast-paced and varied, but regardless of how intense it can be, there is no gore.

The player can sleep with other characters in the game. It is up to them whether they want to court and marry someone first, hire a prostitute, or even gather a few people for group sex. These acts are never seen; the screen fades to black and goofy music plays over some mildly sexual comments and noises. In some cases, the person whom the player is leading to a bed will get excited and make a sexual comment; my wife, for instance, once said, “I can’t wait to rip those clothes off you, darling!” as we approached the bed.

The player can find and buy condoms, which are key to avoiding pregnancy and STDs. When about to have sex, the player will select whether to have protected or unprotected sex. If unprotected with a member of the opposite sex (homosexual sex is also an option), it is possible that the girl involved (whether the player or the player’s wife) will become pregnant.

There is a proposal given when the player is ruler of Albion that involves a choice between renovating the orphanage (at great cost to the kingdom) or kicking out the children and turning it into a brothel (which would add a good deal of money to the treasury). This does not change the sexual content in the game, only the amount of prostitutes that are seen around that part of town.

Some posters in the loading screens are sexual in nature (but never pornographic). There is no actual nudity in the game.

There are ghosts in FABLE III, but they are usually played for laughs rather than as a serious element of the game. Hollow Men, on the other hand, are skeletal undead enemies that can pose quite a threat.

“Will” is the term for magic in this game, and it is an ability of which only the player is capable. It is only available to those who are born as “heroes,” rare people born with great abilities in times of great crisis.

The player is guided in their quest by Theresa, a seer that guided the protagonist’s father through his struggles. She is mysterious and sees the future, though she is never fully understood.

The player eventually discovers a dark force simply known as “The Darkness.” It is a strange creature, and it may very well be spiritual in some way. It is unquestionably evil, and can possess people. The level in which it is introduced is actually effectively creepy, and may frighten younger children.

FABLE III stakes a lot on its moral choices. Some optional sidequests involve murdering people, allowing Balverines (werewolf like creatures) to slaughter an entire village, and seducing a terrible wife to make her divorce her rich and unhappy husband. These quests are optional; never will the player be forced to make an evil choice.

It should be noted that while the player can interact with children, no violent or sexual acts with them are possible.

There is a location at which the player can gamble by betting on chicken races.

The player can get drunk which causes the screen to blur and conversation to be distorted.

There are gnomes scattered across Albion that will hurl insults at the player when they pass by, allowing the player to locate and shoot them. These insults range greatly, but are never blatantly sexual or disturbingly violent (and are in fact quite funny at times).

I found FABLE III to be an enjoyable game, but thought it was far too much like Fable II. It feels more like a long expansion pack than a full-fledged sequel. It retains the undeniable charm for which the series is known and loved, but for someone who played Fable II quite a bit, it felt a bit like I could have just played that for another 20 hours and experienced almost as much. Also, despite a sometimes quite interesting story, the entire ending sequence is one big let-down.

In terms of content, this is not a game for children. It fully considers the player’s freedom, allowing (but not demanding) downright evil choices and many sexual freedoms. If your child would have to ask you what a condom is, it is probably best that this game stay out of their reach.