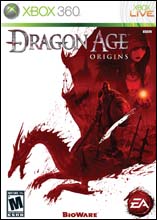 (Warning: Review contains story spoilers.)
In Dragon Age: Origins, the player starts off the game by playing one of six origin stories, each of which last about 2 hours. Which origin story the player plays as is determined by the type of character they create. For example, when I started playing the game, I created my character to be a human warrior, so my character’s origin story was that of a Human Noble. About 8 hours into the game, however, I decided I really did not like this character, so I created a new character which was a rogue elf which made my origin story that of the City Elf. In addition to these two origin stories, there is also an origin story for Mages, a Dalish Elf, a Dwarf Noble and a Dwarf Commoner. Although each origin story is different, each ends the same with the player being recruited by the Grey Wardens to go off and fight the Darkspawn.

Darkspawn are creatures (whose appearance is very similar to orcs from The Lord of The Rings) that live underground. At various times in the history of Dragon Age, the Darkspawn are led by an Archdemon, who takes the form of a dragon, to the surface to destroy all life in what is known as a Blight. The game provides ways for the player to learn more history about how this all started in books that the player can collect throughout the game.

Now, not to try and give away too many details of the story, but through a series of events, a battle takes place near the beginning of the game in which all of the Grey Wardens from the Kingdom of Ferelden, save yourself and one other, are destroyed. So it is now up to you to build an army of men, elves, dwarves and mages to go and battle the Darkspawn and defeat the Archdemon.

Reviewer’s Note: There is a lot of content in Dragon Age: Origins making it impossible to encounter everything the game has to offer in only one playthrough. This review is based off of the review’s experience playing through the game one time.

Dragon Age: Origins is played from a third person point of view. The player can also have up to three people in his/her party. The player has partial control over his character in that the player can freely move his character around, but to attack or use items, the player hits a command button. The strength of the attack, however, is determined by invisible dice rolls (much like the dice rolls in a pen and paper RPG.) The player can also switch control between party members with a simple click of a button; however the player can only control one party member at a time. The player has the option, however, to program the other three party characters to approach the battle from different strategies. This allows for a certain amount of strategy to be used in battles in addition to just simply attacking an enemy.

In addition there are also giant pools of blood that appear after certain enemies are defeated and it is possible to decapitate the heads of enemies.

The bad language I encountered in my adventure in Dragon Age was mild. The word Bas**rd was used most often, but I also encountered a few instances of the words damn, bit** and a**.

It is possible to pursue relationships with other characters in your camp. If you can get someone in your camp to love you enough, then they might be willing to have sex with you. A sex scene then occurs in which you see the two characters getting intimate, although their undergarments remain on.

There is a brothel that you can visit where you can have sex with both male and female prostitutes. If you have sex with a prostitute, a short scene takes place in which you see the prostitute on the bed in their undergarments, the screen goes black and then you hear a quick moan.

Some of the demons in Dragon Age are very seductive looking in that they have the body of a woman. They are topless with tiny little coverings for their nipples.

There is a character you will encounter in the game known as the Lady of the Forest. She is topless, but her hair comes down the front of her chest to cover her nipples.

There is a ritual the character must go through in order to become a Grey Warden in which the person must drink the blood of the Darkspawn. Most people will die from drinking this blood, but if the person survives, then that person becomes a Grey Warden. By having drunk the Darkspawn’s blood and surviving it allows Grey Wardens to be able to sense Darkspawn and also to eventually be able to defeat the Archdemon.

There is reference throughout the game to a deity simply referred to as The Maker.

There is reference in the game to a type of magic known as Blood Magic. Many people in the game view Blood Magic as evil, but there are others, including some in your party who feel there is value in its use.

There is a quest involving a demon possessed child. The demon speaks through the child and the player must figure out a way to save the child.

Some of the quests available through the downloadable content also involve demon possession.

Dragon Age: Origins offers a lot for role playing fans to enjoy in terms of both story and gameplay. There is no doubt, however, that the game was designed for an adult audience. Parents, please keep in mind the M rating and the above mentioned content when deciding if Dragon Age: Origins is appropriate for your family or not.