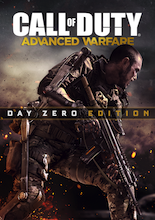 Call of Duty, as a series, had become a beaten dead horse. The new games were not much better than the old, not much new was added, little was changed, the stories were poorly done, and it had even gotten to a point where it was not fun. Which, makes sense, as there has been a Call of Duty released every year for over a decade. Since there are two development studios, each studio has two years to release a game. It is possible, but that is not a lot of time to really make a great game. Which is why Activision, the publisher, brought another studio, so each developer would have an extra year.

Advanced Warfare is Sledgehammer’s first Call of Duty title they have released. Their goal was to revive and rejuvenate the series. They really promoted that they were going to put a lot of effort into their game. From what I have seen, they did a really good job.

Advanced Warfare takes place 40 years in the future. Technology has advanced, and with it, the way we fight our wars. The player plays as Mitchell, a new (6 month) Marine, tasked to help stop North Korea from invading the south.

Early-Game Spoiler: After your best friend dies in the battle, his dad offers you a position in his Private Military Corporation. You then help stamp out one of the worst terrorists of the century. As your team does more and more, and the Private Military grows, the line between helping governments, and total power begins to blur. Soon, the corporation you work for has become the biggest business on the planet, and has monopolized all forms of security. While major threats still exist, the world waits with baited breath to see what this mega-military will do.

Advanced Warfare is (graphically) an extremely realistic game at times. When you shoot someone, you will sometimes see little poofs of blood. When you get shot, your screen will have bloody gore around the edge. If you die, your screen will partly fill with blood. In multiplayer, if the player gets a kill with a knife, blood will temporarily cling to it, and drip off. Massacres occur in the game, and multiple groups of dead civilians are shown. Biological weapons are deployed against civilians, from one of the game’s enemies. A man bleeds out at one point, and ALL of his blood is shown, smeared and puddled around.

The player may use a variety of weapons, including (but not limited to) assault rifles, machine guns, explosives, force shotguns, and lasers. Players also get access to some future gadgets, and will use things like: a zip line to choke enemies, squashing enemies with a hover tank, and using an invisible robot to try to assassinate a target. As mentioned before, civilians may be killed, but if the player does it, they will have to restart at a check-point.

All of the enemies the player fights are either a 3rd world based terrorist organization, or (spoiler) the world’s largest corporation that is trying to bring peace to the world, by taking it over, and will kill thousands, if not millions, in the process. Advanced Warfare does a good job showing that you are fighting for a cause, and not without a very good reason.

A few people are seen drinking (as a toast) during a cutscene, and in multiplayer, a cannabis leaf may be chosen as a player’s emblem.

Though the Call of Duty series is often played by 12-13 year olds, official rating sites (such as ESRB) have labeled it for those 17+, and as such, no children were present when I played. However, a young cousin of mine has played this game, and enjoys it quite a bit.

Sledgehammer knew what they were doing when they joined the Call of Duty team. I remember when Sledgehammer was announced as a developer, a particular Twitter user said “We’ll stop complaining about Call of Duty, if you don’t make a s**t game.” All Sledgehammer replied with was “Ok, we won’t.” I believe that they truly did put their all into this game. It is one of my favorite Call of Duties at the moment, and I love a lot about it. First of all, they put together a tight, reasonable, and well done story. The world building was excellent, and it had scenes which I didn’t think possible in a Call of Duty game (like wanting to just stop, and stare at things going on in the environment, or getting intimidated by a team mate). All of the past COD clichés were either done away with, or perfected (with the exception of a few quick time events).

The exoskeleton suits add many new mechanics, and they are really fun to use. Multiplayer has gotten so fast, and though I haven’t played a lot of it, it has been fun so far. The survival mode is much more fun than those of the past by Infinity Ward, and I personally enjoy it more than Treyarch’s Zombie mode.

Overall, I really like this game. It may not be in my top ten favorite games of all time, but I think that it’s solid, and fun.

The content boils down to killing lots of terrorists/corrupt soldiers, and some gore (more than the other Call of Duties). Due to this, I would say ages 16+, unless a 15 year old is mature for his/her age… parents use your discretion.