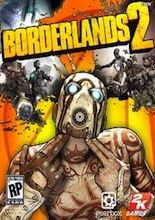 Borderlands 2 manages to be the perfect quintessential sequel on all fronts. It took what the first game did and wraps it a nice box of awesomeness and then multiplies that by 10! In all seriousness, Borderlands 2 does what most sequels can’t and makes a great game even better.

The story finds a whole new set of vault hunters returning to the world of Pandora. Whispers are that a new vault has been discovered and the powerful new corporation Hyperion, run by one of the most comically written antagonist this generation, Handsome Jack, is on the verge of finding it. Under the guise of welcoming all vault hunters to Pandora, he is actually eliminating them as they arrive so he doesn’t have any competition, but your player manages to survive and is the only one that can stop Handsome Jack because you are the one that has “faced Jack and lived!”

The premise of Borderlands 2 is simple, always reward the player. Much like Diablo 3, Torchlight 2, and 100’s of loot-drop games that have come before it, the player is always being rewarded with a slew of new weapons, character skins, grenade mods, and class mods. When you kill a bad guy he may explode into a shower of shiny new weapons, money, ammo, or nothing at all. Opening various chests and containers will result in the same thing. These new weapons may be serious upgrades to the ones you’re currently using, so you switch to your new hotness and start blasting away enemies, that is until you kill the next enemy and a new hotness drops that you have to start using. The very premise of this game plays upon people’s addiction factor. There are several times when I want to quit the game but then say to myself OK, just one more bad guy or chest to see what treasures it holds, then find myself playing 30 minutes longer than I had intended.

So, what makes Borderlands 2 so much better than the first? Well, for one, the story is much more engaging and the dialogue is very well written and very funny. This game has had me in stitches in some parts and plays off pop-culture. Handsome Jack is now one of my favorite villains of all time, just because of the stuff he says, much like the very funny General Knoxx from the expansion pack for the first game General Knoxx’s Secret Armory. Factor in a greater variety of weapons that are plain more fun than the first game, customization of your character by changing their heads and color of their clothes, to some really well written and often humorous optional quests, and you have a game that is just better than the first offering.

Borderlands 2 is rated Mature for good reason. Although, the game features comic book styled graphics the game does feature quite of bit of blood. Enemies can also explode into various pieces. Bodies do however disappear rather quickly.

Quite a bit of foul language on this one. Some words include sh*t, p**sy, a**hole, some words are bleeped out such as godf******damn it.

This game does have sexual references including lines that refer to your “bone” and “incest.”

In one mission players consume alcohol in a bar but it is not excessive.

Although, I am a huge fan of the first game and I like this game just as much, I would use caution because of the mature content in deciding if it is right for your family.