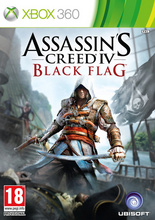 Assassin’s Creed IV: Black Flag is an adult-oriented historical action adventure game filled with intense naval battles, pirate warfare and melee fights. One part of the game takes place in the present where you work for a game company exploring genetic memories to uncover pieces of the past. The majority of the game takes place in the early 1700’s where you take control of Edward Kenway, a pirate and would be assassin in the Caribbean trying to make his mark in history. Players can play through the main storyline or be free to explore a massive open world filled with treasure and countless side quests that have you firing canons at ships, hunting animals for trade, and tracking down artifacts.

There is also a multiplayer mode where it’s assassin versus assassin, with players trying to track down and identify one another in environments crowded with civilians.

The title of the game might have given it away here but there is a lot of violence. The main character in these games is indeed an assassin. Most of the missions require you to kill someone in a variety of ways to proceed further in the game. You’ll see face stabbing, throat slitting and a decent amount of blood shown.

Compared to other games, the language is pretty mild. Only a small handful of F-words and S-words are heard throughout the game. Mild language like hell, ass and bastard are used more frequently.

The sexual content is very mild. The movies might give it a PG13 rating. Some characters wear clothing that reveals medium amounts of cleavage. A couple of sexual jokes are scattered throughout and mostly heard in background conversation.

There are several tavern’s in the game. The player has the ability to drink rum, drinking in excess leads to distortion effects.

My first thought was that it was too much like the other games in the series and it didn’t grab my attention right away. I was able to pick it up and play with no problem because all of the controls were the same. The graphics are impressive no doubt but it really felt the same to me. Climbing things, opening treasure chests, finding animus fragments and sneaking up behind someone to assassinate them. So I thought, maybe this franchise is done and is really just milking it at this point.

Well that was only my first thought and it quickly changed. I really tried just to play through the main storyline so I could get a feel for the game for the purpose of this review but I couldn’t. I just had to complete everything and explore everything. I really enjoyed this game and it has a high replay value to it. The major difference from the other games would be the open sea element. I love being able to captain a ship, command a crew and sail the open seas looking for treasure. The story is so immersive and captivating that it feels like watching a great movie, except you get to be a part of it. This is by far the best game of the series and I highly recommend it.

I would recommend that parents not let kids under 12 play this game. It definitely has mature themes in it. I didn’t mind my eight year old watching me play the game at first because he really enjoys watching it. I even let him play for a little bit so he could go and find me some treasure or play an easy side quest. It wasn’t that bad, but then a cuss word was clearly heard in the game and he asked me what it meant while repeating the word over and over… so there’s that. There is a historical element to this game and a chance for learning but odds are they will miss that element and remember the violence mainly.

As always, I would highly recommend that parents watch and take part in what their children are playing, watching or listening to and use it as a platform for great discussion.