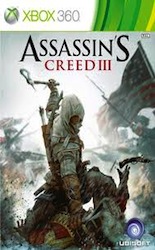 The Assassin’s Creed franchise has been a very important one in recent years, helping to further define open-world concepts within this generation of consoles and presenting detailed recreations of real historical locations and events. And with Assassin’s Creed III (technically the fifth game, since Assassin’s Creed II was basically its own trilogy), this story comes to a close.

At this point in the story, Desmond and the others are close to finding a solution for an apocalyptic event that has been foretold by an ancient civilization. But there are just a few more things they must know, and in order to discover them, Desmond must once again enter the Animus: a machine that extracts ancestral memories from his DNA and reconstructs them digitally, allowing him to relive a simulation of his ancestors’ life. This time, he becomes Connor, a half Native American and half Englishman who joins the Assassin order during the early rumblings of the Revolutionary War.

The setting is fantastic, and despite the fictional exploits of the Assassins and their war against the Templars, the game follows the series staple of creating cities like Boston just as they were back then, down to important landmarks and even events such as the Battle of Bunker Hill. Though I wouldn’t substitute the fictionalized accounts in this game for a history textbook, it can certainly inspire more interest in the time period than any textbook I’ve ever read (not that it would be difficult to inspire more interest than your average textbook).

The gameplay remains mostly the same as from previous entries. The game is played in third-person, and the player controls Connor as he navigates the streets, rooftops, and wilderness of colonial America. Players will assassinate important enemies, take on various missions from key leaders of the American Revolution, and explore the game world looking for treasure to discover, animals to hunt, and tradesmen to invite to Connor’s homestead.

It’s worth noting that the “Assassins” in this series are part of an organization dedicated to allowing the world to be free of the influence of the Templars, another group bent on keeping the world safe by controlling it entirely. That is to say, this game is not about hired killers, but an organization that kills for the greater good. That said, their philosophy is itself purposefully flawed, and their positive purpose doesn’t eliminate the fact that there is a lot of killing in this game. So then, just how appropriate might this game be for your children?

There is a lot of killing with swords, knives, and other bladed weapons, but there is also much use of pistols and muskets. The result is a lot of violence with a decent amount of blood (which can be turned off in the options). Though there is no gore, some of the deaths in combat can be pretty brutal, such as countless quick knife strikes to the abdomen or a bayonet through the face.

Lesser vulgarities are also used here and there.

Benjamin Franklin talks to a character at length (though the conversation is entirely optional) about a book he is writing regarding the benefits of taking an older woman as a sexual lover.

Reviewers Note: Spoilers for the series abound here, so… you have been warned.

The protagonists (most notably those in modern day) are communicated with by Juno and Minerva, of mythological fame. In reality, they are remnants of an ancient civilization, left behind in hopes of stopping a repetition of the phenomenon that wiped out their civilization thousands of years ago. So really, the only “magic” going on here is actually science that is too advanced for us to comprehend.

Though some may take issue with the fact that this effectively goes against any and all religions (the first game specifically mentioned that Jesus used an ancient device to perform his miracles), though it’s worth noting that the development team goes out of their way to inform the player before each game that they are a team of various faiths creating a fictional story, and this is not to be taken as a statement for or against any religious worldviews.

Much of the story revolves around revenge, and while Connor’s character growth is well done throughout most of the game, the ending gives him little closure and simply resolves after revenge has been accomplished. So it’s not even so much that it’s condoning revenge as it is that it didn’t bother actually taking a stance on it.

My general policy is not to let children play an M-rated game, so nothing here.

I’ve been a fan of the Assassin’s Creed series since the first one, and while I don’t go as nuts for it as some fans do, I have a lot of respect for the series. The games are generally very well-designed, and experiencing history through the Animus allows for a lot of neat narrative tricks (i.e. the player can’t kill civilians because their ancestor didn’t, so diverging from their experience by killing too many innocent people will desynchronize Desmond from the memory). I was excited to hear that the third game was set in the Revolutionary War, and the game delivered on most of what I wanted it to.

The player can now climb through trees, and this mechanic is done quite well. The stealth missions are designed rather well, and trying to run and hide from pursuers is just as fun as it’s always been. The vistas from tall buildings and high mountains are more beautiful than ever, and the thrill of diving off them into water or a haystack never gets old. The ending is a letdown with both Connor and Desmond, unfortunately (I think they took some notes from Mass Effect 3’s atrocious conclusion), but the experience as a whole is still quite engaging. This is definitely one of the best of the series in many ways, though it’s hard to deny the formula is getting a bit old.

As for its content, Assassin’s Creed 3 is really no more or less appropriate than previous games in the series. If your child has played previous Assassin’s Creed games, you have no reason to keep them from this one. If they have not—though I would recommend starting at the beginning, since this story is far too complicated to jump in partway—I would say it mostly comes down to whether they are mature enough to handle the violence and occasional strong language, though the intellectual ability to really analyze the philosophies behind the Assassins and Templars rather than just accepting an “us vs. them” mentality is a plus.