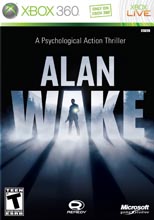 Alan Wake begins in a dream. In the dream, the main character, Alan Wake, has just struck a poor hitchhiker with his car as he sped along a dark, lonely road. When Alan goes to check on the man, however, the man has been taken over by some evil darkness that wills the now dead hitchhiker to try and take Alan’s life. As this scene fades into memory, the true story opens as Alan and his wife, Alice, are on their way to a small mountain town in the Pacific Northwest called Bright Falls for a much needed vacation. Alan, a famous suspense novelist, similar to Stephen King, is suffering from writer’s block. Alan’s wife hopes this getaway will be just the thing he needs to get his creative juices flowing again. As the story continues, Alan’s wife comes up missing and Alan finds himself awake behind the wheel of his now crashed car, unaware of where he is and how he got there. It turns out a week has gone by since his wife’s disappearance and now Alan must figure out what happened to his wife as well as what happened during the course of the last week.

From the very beginning of the game, Alan Wake is an intense, at times frightening, dark, experience. The setting of Bright Falls feels just like any other small mountain town. The townsfolk are simple people, whose most exciting time of the year is Deer Fest, which in the game takes place in a couple of weeks. Yet, with as peaceful and serene as the town seems, it is most apparent that something sinister lurks within the area. It is only when the sun goes down that the true horror of Bright Falls is revealed. Possessed by a “Dark Presence”, some of the townsfolk seem hell-bent on ending Alan Wake’s life as he investigates the disappearance of his wife.

To combat this darkness, Alan uses a gun as well as a flashlight. With the flashlight, he is able to wash away the darkness and weaken the evil that possesses these unfortunate souls. Once they are weakened, Alan can shoot them with his gun. It is this theme of light vs. darkness that drives most of the story in Alan Wake. The darkness is the enemy, and the only way to combat the darkness is with the light. The game saves at overhead street lights, and as the game moves into the more difficult areas, the player will feel an intense sense of relief every time a bright light appears in the distance. It only becomes a question of how fast can you get there.

Alan Wake plays out as a linear third person shooter for the most part. There are some elements of driving and a few rare instances where a very simple puzzle must be solved, but overall, Alan Wake is a third person action game. As the game progresses, Alan uses 3 main weapons in conjunction with his trusty flashlight. These weapons include a revolver pistol, a hunting rifle, and a shotgun. Before Alan is able use these weapons against his foes, he must first weaken the darkness with his flashlight. Once the darkness is gone, Alan can begin firing rounds to dispose of enemies. In addition, Alan will eventually gain access to flares, which will also ward off attackers, flashbangs (light grenades) which will dispatch enemies within the blast radius, and a flare gun, which is the equivalent of a rocket launcher against those possessed by the darkness.

Surprisingly, there is very little blood or gore in Alan Wake. As enemies are killed, they simply dissolve in a glowing explosion. On the other hand, the enemies attack with such ferocity that it can be very frightening. They attack with all varieties of cutting and chopping tools that one would find in a small rural community. Axes, scythes, chainsaws, and sledgehammers all make an appearance in the hands of those possessed, also referred to as “The Taken”, and they have no reservations about teaming up and swinging away most savagely.

There is, however, at least one or two instances where a little bit of blood is shown. For example, in one level Alan comes across another man who was also attacked by “The Taken” and there is some blood on the ground.

There are specific instances of foul language in Alan Wake. Most notably, the words hell, b**ch, a**hole and s**t.

The phrase “g*dd***it” is also used on occasion.

There is very little sexual content in Alan Wake. Most notable was a minor sexual reference that Alan makes to his wife. Also, Alan’s wife is shown at times wearing only a t-shirt and underwear.

There are very few explicit religious references in Alan Wake, but there are definitely references to the battle between light and darkness. The main evil in the game is referred to as “The Dark Presence”. It has the ability to possess the people of Bright Falls. In order to battle them, Alan uses light in various forms to wipe the darkness away.

Part of one level takes place in a church. Also, a trailer park manager claims to be “a God-fearing’ man”.

There are a couple of scenes where excessive drinking is noted and emphasized by the main characters. In the most explicit scene, the main character becomes drunk, passes out, and then has a revelation-like dream that moves the story along.

As Alan progresses through the game, he comes across manuscript pages from a book that he cannot remember writing. These pages actually foreshadow the story that is soon to unfold and some of the material can be disturbing.

There are televisions scattered throughout the world that will play short episodes from a show called “Night Springs”. This show feels similar to “The Twilight Zone” in the content that it presents.

In this reviewer’s opinion, Alan Wake is one of the finest games I have ever played. Though I do not usually enjoy “survival” games, I found Alan Wake to be very engaging without being too gratuitous with blood and gore as most survival games tend to be. As I played, I told my wife numerous times that “this is the best movie I have ever played”. Alan Wake is the first game that I have played that I feel truly merges the art forms of film and video game in a way that feels authentic. The music is fantastic and is a major component of the game. The cinematography emphasizes the right camera angle to capitalize on the emotions that the game is trying to evoke from the player. All in all, Alan Wake is a game that I will be playing through again, the same as I would watch a good movie again. With that said, however, parents should keep in mind the above mentioned content when deciding if Alan Wake is a good fit for your family or not.